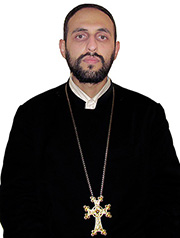 From 2000 to 2003, Rev. Fr. Tatev Maruqyan studied at the Theological Seminary of Gyumri, Armenia.

From 2003 to 2006, Rev. Fr. Maruqyan studied at the Gevorkian Theological Seminary of the Mother See of Holy Etchmiadzin.

In 2006, he was ordained as a deacon by His Eminence Archbishop Nerses Pozapalyan and was appointed to serve at the Christian Education Center of the Mother See of Holy Etchmiadzin.

In 2008, Rev. Fr. Tatev Maruqyan successfully defended his final theses entitled “Christian Upbringing in the Family and the Concept of Faith among Children.”

In 2008, he was consecrated and ordained as a secular (married) priest by His Grace Bishop Sahak Mashalyan, and given the priestly name of Tatev.

In 2020, by the order of His Grace Bishop Vazgen Mirzakanyan, the Primate of the Diocese of the Armenian Apostolic Orthodox Holy Church in Georgia, Rev. Fr. Tatev Maruqyan was appointed to serve at St. Echmiadzin Church in Tbilisi, Georgia, as a ceremonial priest, as well as the Spiritual Advisor of “Hovhannes Tumanyan’s House” Scientific, Cultural Center, under the authority and supervision of the Primate of the Diocese..