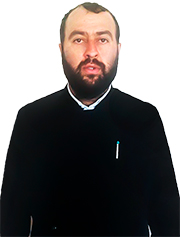 In 1993 He moved to Ninotsminda, Georgia.

From 2008 to 2013 He studied in Vaskenian Theological Academy at Lake Sevan, and was awarded with a Bachelor's degree.

In 2013 He entered the school for priests.

In 2016  He was ordained as a deacon by His Grace Bishop Mushegh Babayan.

In 2017 Graduated from the Priest School of the Mother See of Holy Etchmiadzin.

From October 1, 2017 Rev. Father Ghevond Tazayan was appointed to serve in the Armenian Diocese in Georgia as a spiritual superintendent of Akhkyorpi, Gyulubulagh, Khozhorni, Chanakhchi, Ozni, Brdadzor villages in Marneuli region. During this period, he lived in Tbilisi and participated in the ceremonies offered in the Cathedral of Saint George and Saint Etchmiadzin church.

From May 1, 2018 He left his service in the Pastorate of Marneuli and was appointed to serve in Samtskhe – Javakheti and Tsalka’s General Prelacy as the assistant of the Pastor of Armenian settlements in Tsalka region.

On February 24, 2022 On the Feast of St. Vartan the Captain and his Companions, he was ordained as a priest by the Primate of the Armenian in Damascus, His Grace Bishop Armash Nalbandyan in Holy Mother of God (Surb Astvatsatsin) church of the Armenian Diocese in Armavir and received name Rev. Father Gevond.

On May 1, 2022 Under the presidency of His Holiness Karekin II, Supreme Patriarch and Catholicos of All Armenians and by the order of the Primate of the Armenian Diocese in Georgia, Rev. Father Archimandrite Kirakos Davtyan, Rev.

Father Ghevond Tazayan was appointed to serve in Samtskhe – Javakheti and Tsalka’s General Prelacy as the Pastor of the Pastorate in Tsalka region.