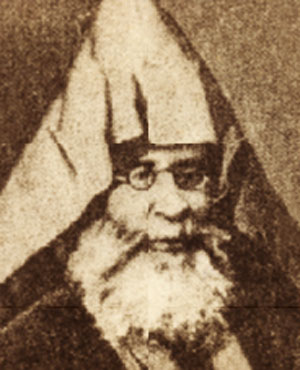 Gabriel Ayvazyan was born on May 10, 1812 in Feodosiya. His father Gevorg Aivazi or Haivazi (Constantine Haivazovski), was an emigrant from Moldova and a merchant by profession. His brother was the famous marine painter Hovhannes (Ivan) Aivazovsky. Archbishop Gabriel Ayvazyan was an editor, philologist, historian, writer, translator, and teacher.

From 1826 to 1830, he studied in the Lazarian Seminary (“Saint Lazarus of the Armenians”, Saint Lazarus Island in Venice).

In 1830, he became a member of Mkhitarians Brotherhood (The Mekhitarists are a monastic order of the Armenian Catholic Church founded in 1700 by Abbot Mekhitar of Sebaste. The Mekhitarists follow the Rule of Saint Benedict. They are best known for their series of scholarly publications of ancient Armenian versions of otherwise lost ancient Greek texts and also for their research on classical and modern Armenian language).

In 1834, he received the rank of Archimandrite. In the Mkhitarian monastery, he served as the Chief Secretary of the Brotherhood. In Mkhitarian School, he was a lecturer of theology, philosophy, as well as Eastern and European languages. He was a mentor of Ghevond Alishan (an Armenian Catholic priest, historian and poet who was awarded the Legion of Honour by the French Academy (1866), was an honorary member of the Asian Society of Italia, Archeological Society of Moscow, Venice Academy and Archeological Society of Saint-Petersburg).

From 1843 to1848, Archbishop Gabriel Ayvazyan was the first editor of “Bazmavep” Magazine.

In 1848, Archbishop Gabriel Ayvazyan was appointed the director of Muradians College in Paris and held this position until 1855. In the same year, he lectured on History of Armenia and Armenian Language in the same college.

In 1855, following a quarrel with the Mkhitarians Brotherhood, Archbishop Gabriel Ayvazyan officially renounced Catholicism and became a member of the Armenian Apostolic Orthodox Holy Church.

With Khoren Galfayan and Sargis Teodoryan he founded the Haykazian Armenian College in Paris. He started publishing “Maseats Aghavni” Magazine in Armenian and French languages and was also the editor of the magazine.

In 1858, by the order of Gevorg IV Kostandnupolsetsi Kerestejyan, Catholicos of All Armenians, Archbishop Gabriel Ayvazyan was appointed to serve in Feodosiya, where he established Khalibyan College. Meanwhile, he continued the publishing of “Maseats Aghavni” Magazine in Russian and Armenian languages in Feodosiya until 1865.However; the Khalibyan College was closed in 1871.

In 1867, Gabriel Ayvazyan was consecrated as a Bishop, and in 1871, he received the rank of Archbishop by the Pontifical Encyclical of His Holiness Gevorg IV Kostandnupolsetsi Kerestejyan, Catholicos of All Armenians.

From 1875 -1876, Archbishop Gabriel Ayvazyan was appointed to serve as an administrator at the Gevorkian Theological Seminary of the Mother See of Holy Etchmiadzin.

In 1977, the relics of Archbishop Gabriel Ayvazyan were relocated to the graveyard of the Cathedral of Saint George (Surb Gevorg).