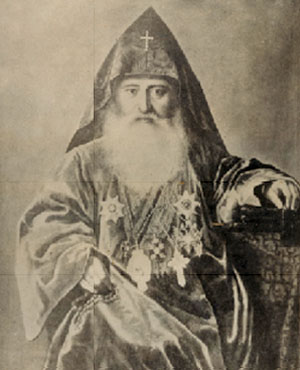 Archbishop Hovhannes Karbetsi was born in 1762 in Hovhannavank, a small village, which was a part of Karbi village. He studied in the school of Mughni Monastery, then in the Seminary of the Mother See of Holy Etchmiadzin. He was ordained as a celibate priest when the Catholicos of All Armenians was Ghukas I Karnetsi.

In 1807, he was consecrated as Bishop by Daniel I Surmaretsi, Catholicos of All Armenians, and was appointed to serve as a Primate of the Diocese of the Armenian Apostolic Orthodox Holy Church in Georgia. During the period of his leadership, as the Primate of the Diocese, he tried to decrease the influence of Archbishop Nerses Ashtaraketsi and thus reduce the significance of his activities.

In 1831, he was elected and consecrated as Hovhannes VIII Karbetsi, Supreme Patriarch and Catholicos of All Armenians. He gave acceptance to the principle of determining the historical numbering of the Armenian Catholicoses.