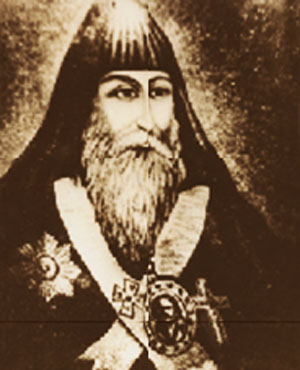 Archbishop Karapet Bagratuni (baptismal name Hovhannes) was born on May 18, 1779, in Karin, Erzurum. He was descended from a noble family. His father’s name was Grigor, and his mother’s name was Aregnazan. He studied in Kemaliye, and later on in Constantinople. He was originally known by the surname Eghikyan. Archbishop Karapet Bagratuni was a talented writer and witty person. He was tireless and extremely dedicated to his work as well as an active and quick-witted clergyman.

In 1801, he received the rank of Archimandrite.

On August 21, 1808, he was appointed to serve as the Primate of the Diocese in Karin.

On November 2, 1811, Eprem I Dzorageghtsi, Catholicos of All Armenians, consecrated him as a Bishop; afterwards he was granted the title of Archbishop.

From 1829-1830, he organized the immigration of 50,000 Armenians from Karin, Erzurum, and the neighboring villages, to Akhalkalaki, Akhaltsikhe, Tsalka, Lori-Pambuk and Shoragial regions. During the governance of Archbishop Karapet Bagratuni, the most valuable historical-spiritual books, ancient manuscripts and ecclesiastical objects were relocated to Ahaltsikhe from all the Armenian churches in Erzerum and its neighboring villages. One of the renowned ancient manuscripts, which was thus transferred, was the famous “Tsughrut Gospel”.

Nikolas I, Tsar of Russia, bestowed upon Archbishop Karapet Bagratuni the praise of His Imperial Majesty for his devotion, zeal and hard work for the upliftment of his community.  Russian Tsar Nikolas I also granted Armenian emigrants the privilege of exemption from paying state taxes for one year. Archbishop Karapet Bagratuni was also awarded the Order of St. Anna, First Class.

During the 20 years of his long and  dedicated service as the Primate of the Diocese of  the Armenian Apostolic Orthodox Holy Church in Georgia, Archbishop Karapet Bagratuni built almost 60 churches, as well as many Armenian schools, among  which are worth mentioning, the Karapetyan Parochial School in Akhaltsikhe and the  Male High School in Akhalkalaki, named after Saint Mesrop Mashtots.

Archbishop Karapet Bagratuni died in 1856 and was buried in the graveyard of the Church of Surb Prkich (Saint Savior) in Akhaltsikhe.

In 1953, his relics were relocated to the local cemetery.