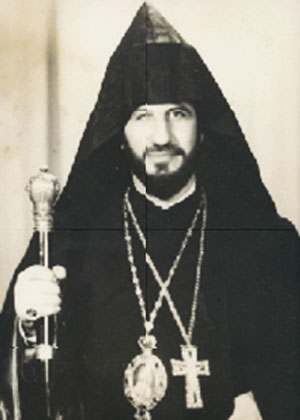 From 1940 to 1945, he studied at the Theological Seminary of the Armenian Apostolic Orthodox Patriarchate of Jerusalem.

In 1945, he was ordained as a deacon by His Beatitude Archbishop Kyurekh, the Patriarch of Armenian Apostolic Orthodox Holy Church of Jerusalem, Israel.

In 1947, he immigrated to Armenia studied at the Yerevan Music College.

In 1948, by the order Gevorg VI Chorekchyan, Catholicos of All Armenians, he became a member of the Brotherhood of the Mother See of Holy Etchmiadzin.

On March 18, 1951, he was consecrated as a celibate priest by Archbishop Vahan Kostanian and was given the priestly name Komitas for having for his lovely voice. After consecration of celibate priest, he was appointed at the Monastery of St. Geghard as the Abbot.

From 1952 to1954, he served in the Armenian Churches in Baku and in Tbilisi as the Pastor.

On December 11, 1954, he received the rank of Archimandrite (Vardapet).

In 1956, he was appointed to serve as the Diocese of Armenian Apostolic Orthodox Holy Church in Shirak, as the Primate.

From 1957 to 1972, he served as the Primate of Diocese of Armenian Apostolic Orthodox Holy Church in Georgia.

The Holy Altar and the floor of the Cathedral of St. George in Tbilisi was renovated with marble and mosaic by the order of Archbishop Komitas Ter- Stepanyan.

In 1957, by the order Archbishop Komitas Ter- Stepanyan, the Primate of Diocese of Armenian Apostolic Orthodox Holy Church in Georgia, the relics of four Armenian famous generals (Mikhail Tarielovich Loris-Melikian (1824-1888), Lieutenant General Arshak Ter-Gukasyants (1819-1881),  Hovanes Lazaryants (1820-1879), Army General of Imperial Russian Army  and Mayor-General Beybut Shelkovnikyants (1837-1878)) were transferred from Vank Church to the Cathedral of St. George in Tbilisi and was reburied in front of the Cathedral.

On November 24, 1957, Vazgen I Paljyan, Catholicos of All Armenians, consecrated him as a Bishop in the Mother Cathedral of the Mother See of Holy Etchmiadzin.

In 1972, by the order Vazgen I Paljyan, Catholicos of All Armenians, Bishop Komitas Ter- Stepanyan moved from Tbilisi to Yerevan and was appointed to serve as the Vicar of Araratian Patriarchal Diocese.  Soon he was granted the title of Archbishop and was elected a member of the Supreme Spiritual Council of the Mother See of Holy Etchmiadzin.

After a serious illness, Archbishop Komitas Ter- Stepanyan deceased on December 3, 1980, at the age of 55.