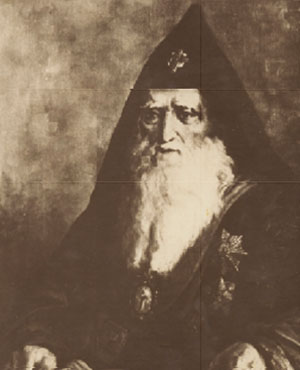 In 1794, he received the rank of Archimandrite.

In 1808, he was consecrated as a Bishop and later was granted the title of Archbishop.

On March 7, 1814, he was appointed as the Primate of the Diocese of the Armenian Apostolic Orthodox Holy Church in Georgia.

In 1828, Archbishop Nerses Ashtaraketsi was appointed to serve in Bessarabia as the Head of the Armenian Diocese in Bessarabia by the order of Ivan Paskevich (Paskevich was an Imperial Russian military leader) which was a sort of “free” exile.

From 1828-1829, Archbishop Nerses Ashtaraketsi organized the immigration of Armenians from Persia and Turkey.During this period, about 90.000 Armenians, from the province of Karin, were relocated to Akhalkalaki and Akhaltsikhe regions.

In 1843, he was elected and consecrated as Nerses V Ashtaraketsi, Supreme Patriarch and Catholicos of All Armenians.

He lived periodically in Tbilisi and Etchmiadzin. In the memory of Nerses Ashtaraketsi remain; the building of the Nersisyan Theological School of Tbilisi, the Lake Nersisyan and Nersisyan Forest of Etchmiadzin.

On February 13, 1857, 87-year-old Nerses V Ashtaraketsi, Catholicos of All Armenians, passed away at his desk, at the residence of the Diocese of the Armenian Apostolic Orthodox Holy Church in Georgia, in Tbilisi. His body was later moved to Holy Etchmiadzin.