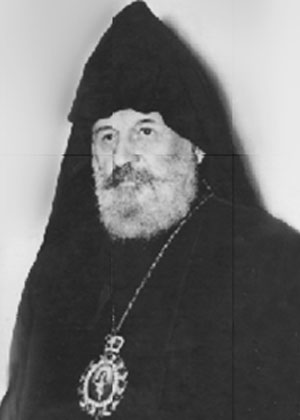 From 1896 to 1901, he studied in Diocesan School of Shushi. In the same year, he was appointed to serve as a teacher in Janyatagh village school of Jrabert district, where he worked until 1904.

In 1904 by favorable prerogative of Khrimyan Hayrik he was ordained as a priest in his native village. In the same year, he was invited to Grozny in the North Caucasus, where he served for 25 years as a priest and teacher. In Grozny he was a teacher at Female and Real Gymnasiums, he organized the local Charitable Society and Charitable Committee, guided and presided them. He established a rich library at parochial school in Grozny, where 250 students studied.

In 1929, he moved to Baku to serve as a curate, he was simultaneously engaged in teaching.

In 1945, he was appointed to serve at St. Gregory Illuminator Church in Baku, as the Pastor.

In 1952, he was appointed to serve at the Diocese of Armenian Apostolic Orthodox Holy Church in Georgia as the Pastor of the Cathedral of St. George in Tbilisi, Georgia.

On December 1, 1954, he was appointed to serve at the Diocese of the Armenian Orthodox Holy Church in Nor Nakhijevan as the Primate of united Dioceses of Nor Nakhijevan and North Caucasus.

On October 6, 1955, Vazgen I Paljyan, Catholicos of All Armenians, consecrated him as a Bishop. After the consecration, Bishop Vardan Ter-Sahakyan was elected a member of the Supreme Spiritual Council of the Mother See of Holy Etchmiadzin and was appointed to serve at the Diocese of Armenian Apostolic Orthodox Holy Church in Georgia as the Primate of the Diocese. He served until 1956.

In 1962, Bishop Vardan Ter-Sahakyan retired and until the rest of his life lived periodically in the Mother See of Holy Etchmiadzin and in Baku, his relatives where resided.