Feast of St. Sarkis the Captain celebrated at the Armenian Diocese in Georgia

On January 30, 2021, Armenian Apostolic Holy Church celebrated the Feast of St. Sarkis the Captain, his son Mardiros and his 14 soldiers-companions. Because of the current pandemic, geopolitical and social issues, the formats of celebration of the spiritual and folk holidays are changing, but the mystery and significance of celebrations are maintaining.

The Feast of St. Sarkis was properly celebrated at the Armenian Diocese in Georgia, particularly, in Tbilisi. Despite the lack of public transportation, the faithful, however, celebrated the feast with a great craving and with a traditional march to the chapel named after Saint, built in 1883.

On January 29, on the eve of the Feast, the pilgrims gathered at the courtyard of Saint Etchiadzin church in Avlabari, praying and receiving blessings of clergy, afterwards, accompanied by Rev. Father Husik Harutyunyan and Rev. Father Tatev Marukyan, spiritual servicemen and deacons, they walked towards St. Sarkis Chapel in Kharpukh district with icons of St. Sarkis and crosses, singing psalms and hymns and praying. The participants of the march stopped and prayed near the ruins of Shamkhoretsots Karmir Avetaran (Red Gospel) church.

All the pilgrims took their turns and entered St. Sarkis Chapel one by one, lit candles and eagerly prayed there. During that time, spiritual songs were sung with the participation of spiritual servants and marchers joined them. After their pilgrimage, the pilgrims reached the Cathedral of Saint George (Surb Gevork) and joined the faithful who were already there.

The Cathedral of Saint George and the church's courtyard were crowded. An Evening Service was offered on the eve of the Feast under the presidency of Vicar of the Armenian Diocese in Georgia, Rev. Father Archimandrite Kirakos Davtyan and spiritual superintendant of Armenian communities in Kvemo-Kartli region Rev. Father Archimandrite Zaven Yazichyan and with the participation of clergy and deacons. 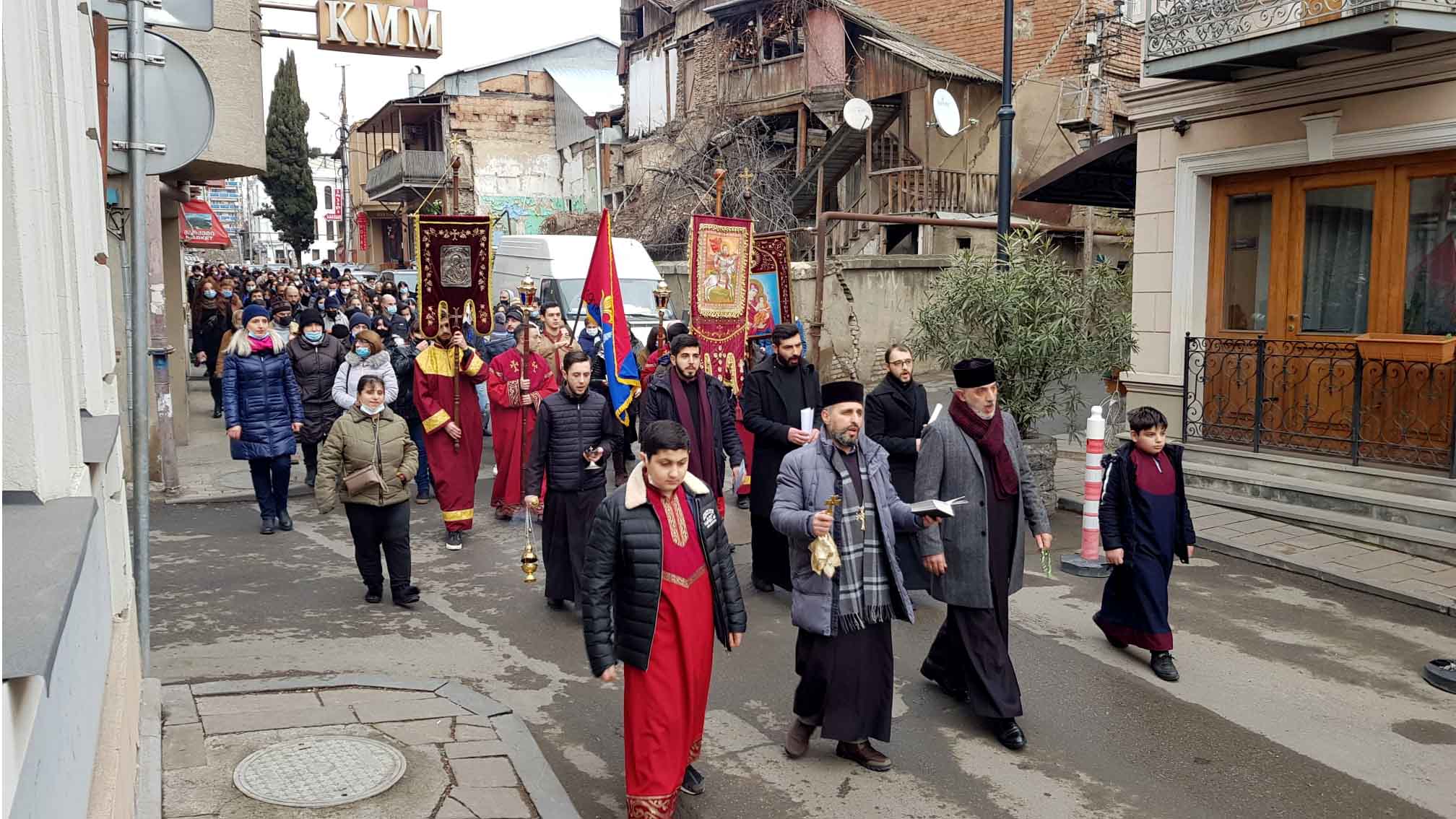 Rev. Father Kirakos offered his blessings to the attendees, preached about the mystery of the Feast, martyrdom of St. Sarkis, his son and his companions for the sake of Christianity. Rev. Father also touched upon the fact, that by the order of His Holiness Karekin II, Supreme Patriarch and Catholicos of All Armenians the Feast of St. Sarkis the Captain was proclaimed as a day of blessing of young people. Rev. Father offered Blessing of Youth Service and wished the young people to fulfill their goals.

The Feast of St. Sarkis traditionally is not only celebrated with church ceremonies, but also with folk celebrations. At the conclusion of the service offered on the eve of the feast, the young people received salty cookies with a hope that their dreams will come true.

During the Divine Liturgy, the celebrant spoke about the mystery of the day and the martyrs for the Christian faith. Rev. Father paid tribute to the memory of thousands of young heroes who died in Artsakh war. Rev. Father Zaven encouraged the faithful to be devoted, to love Homeland, to live with faith and love. He concluded his sermon by congratulating all men whose name is Sarkis on the occasion of their naming day and wished the youth happiness and fulfillment of their dreams through the intercession of St. Sarkis.

At the Armenian Diocese in Georgia the Feast of St. Sarkis the Captain was celebrated with Divine Liturgies, pilgrimages to the chapels named after Saint, Blessing of Youth Services preserving folk traditions and distributing salty cookies made by the students of the youth centers. 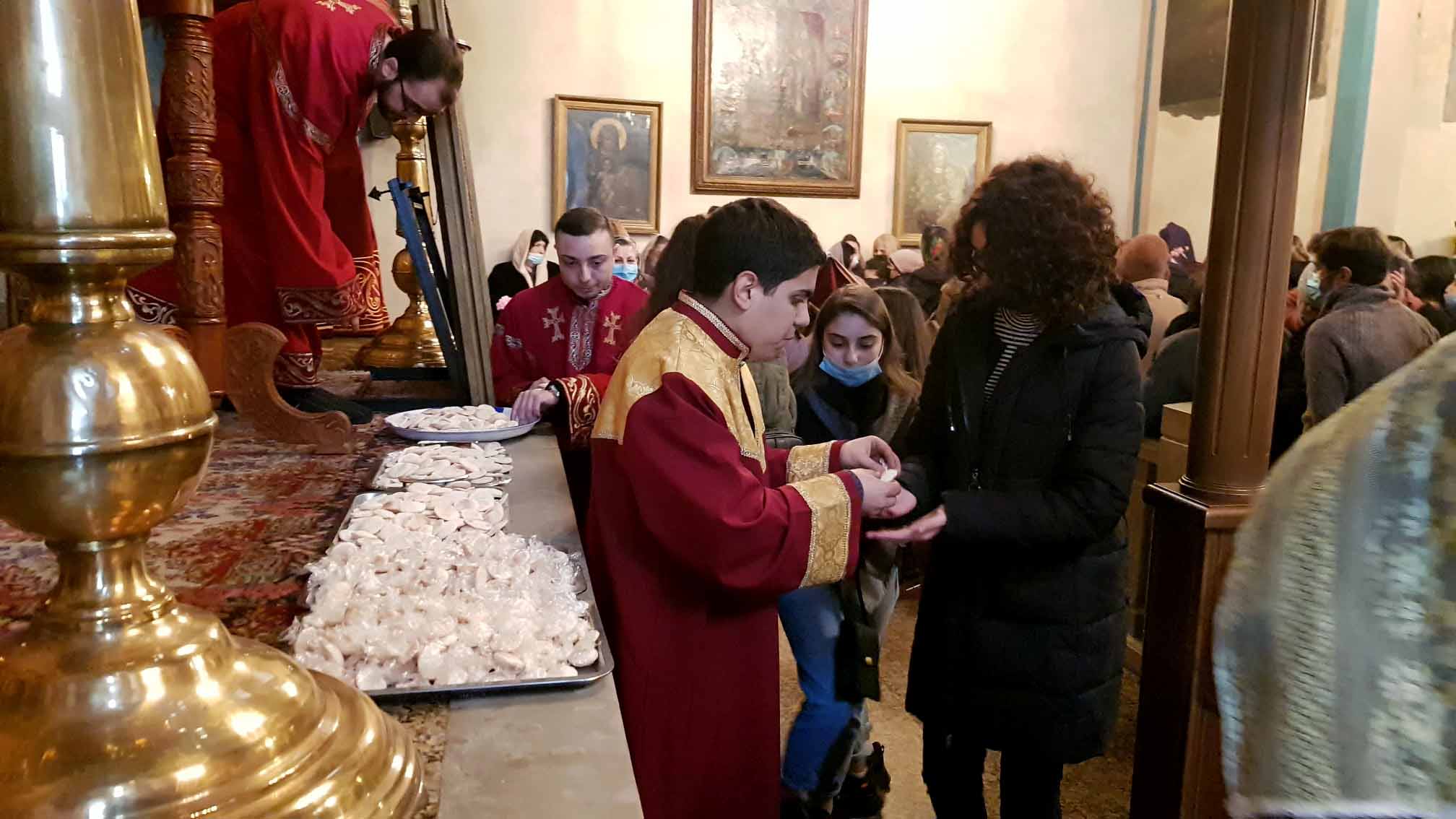