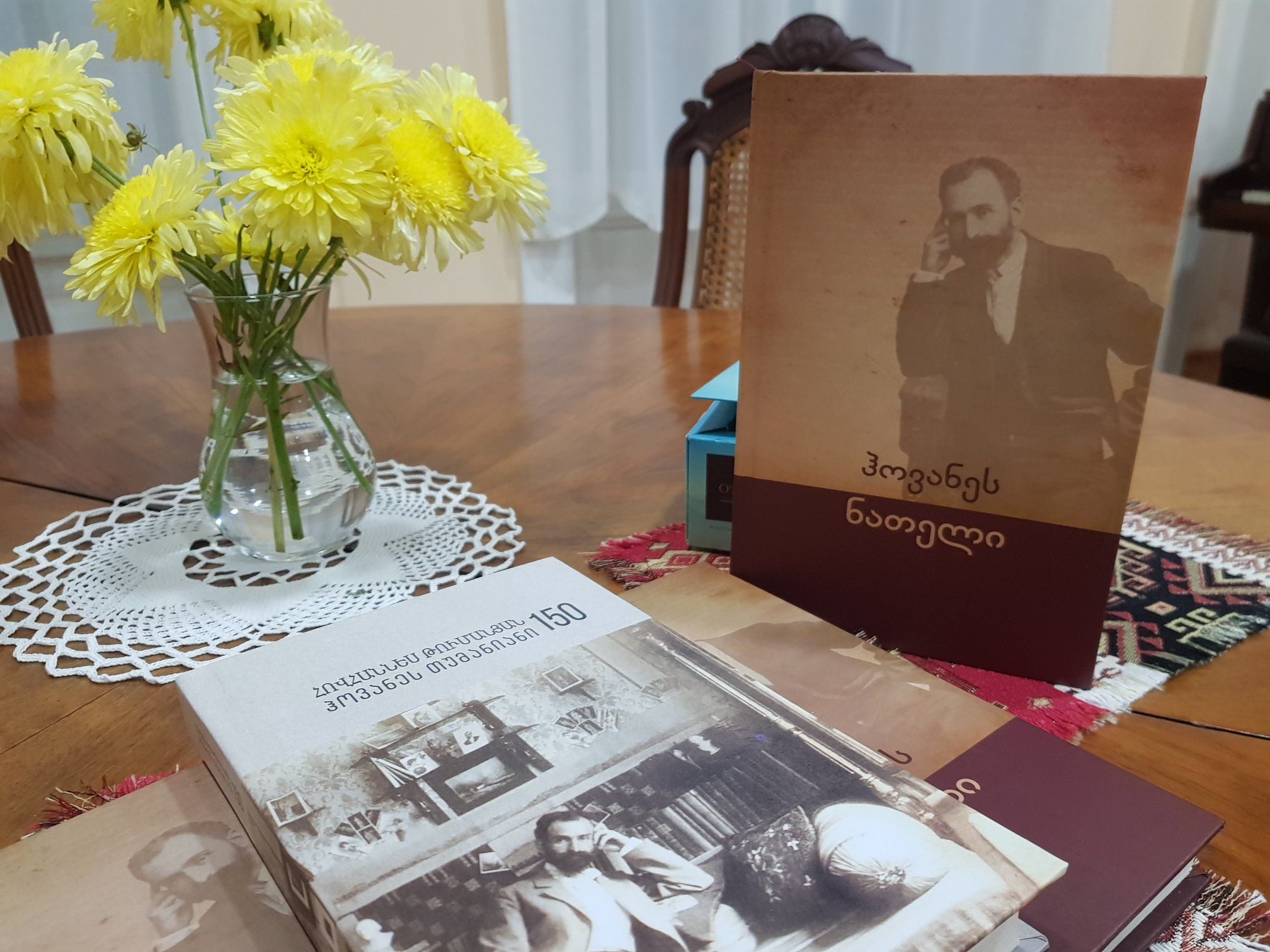 On December 11, 2019, the presentation of Hovhannes Tumanyan's three new books became also the summary of events dedicated to the 150th anniversary of two geniuses - Tumanyan and Komitas Archimandrite (Komitas Vardapet). The event took place in the ceremony hall of Ministry of Education, Science, Culture and Sport of Georgia, in Tbilisi.

In attendance were First Deputy Minister of Education, Science, Culture and Sports Badri Maisuradze, senior officials of the State Ministry for Reconciliation and Civic Equality of Georgia and Ministry of Culture of Abkhazia, Members of Georgian Parliament, diplomats, community figures, and public representatives.

An honorable delegation has arrived from Yerevan, led by Ani Yeghiazaryan, director of Hovhannes Tumanyan Museum in Yerevan. The ''Retrospect'' exhibition had decorated the hall, organized by ''Armenpress'' news agency. Photos, which were collected on the occasion of Tumanyan's 100th anniversary, were presented by the news agency.

Nana Dolidze, employee of the Department of Culture of Georgia; Tinatin Ghogheliani, representative of the State Ministry for Reconciliation and Civic Equality; Vardan Devrikyan, Doctor of Philology; Ani Yeghiazaryan, director of Tumanyan Museum; Aram Ananyan, director of ''Armenpress'' news agency made speeches. They touched upon the life and activity of Hovhannes Tumanyan, who was born in Dsegh village, Lori region, and after some years moved to Tbilisi, the poet, who devoted his entire conscious life to praise the friendship of peoples and who was buried in the Pantheon of the Armenian Writers and Public Figures ‘’Khojivank’’. Ambassador Extraordinary and Plenipotentiary of Armenia to Georgia Ruben Sadoyan attached importance to the installation of the statue of the All-Armenian Poet in Tbilisi, highlighted that the Embassy continues its work in that direction.

Three new books dedicated to Hovhannes Tumanyan’s 150th anniversary were presented in the hall. The collection of stories “Ten fairy tales’’ which includes Tumanyan’s four fairy tales translated by Georgian poet Ioseb Grishashvili, and six more fairy tales translated by poet and translator Givi Shahnazar. The latter spoke about genius poet Hovhannes Tumayan, attached importance to his fairy tales being simple and understandable, philosophical and always modern, emphasized that those stories are close to hearts of all the members of society – elderly and young people as well. The illustrations were made by Ivane Kezua and Shorena Chachanidze. The translation, publishing and printing of fairy tales book were implemented by the Tumanyan Museum in Yerevan.

Maghvala Gonashvili, co-chair of Georgia Writers’ Association spoke in detail about the book “Tumanyan-150”, which was published within the framework of the “Colorful Georgia” project of the Ministry of Education, Science, Culture and Sport of Georgia. Tumanyan’s untranslated quatrains, as well as several poems and letter which were translated earlier were included in “Tumanyan-150” book. The “Lighting of Tumanyan” was composed by an expert on Georgia, Doctor of Philology, Professor Hrachya Bayramyan and it includes Tumanyan’s poems, articles and letters dedicated to Georgia and his Georgian friends, as well as the letters, poems, appreciations of Georgian figures to Tumanyan. The book was published due to the financial support from RA Ministry of Culture, Armenian Diocese in Georgia and individual benefactor Sergey Simonyan. 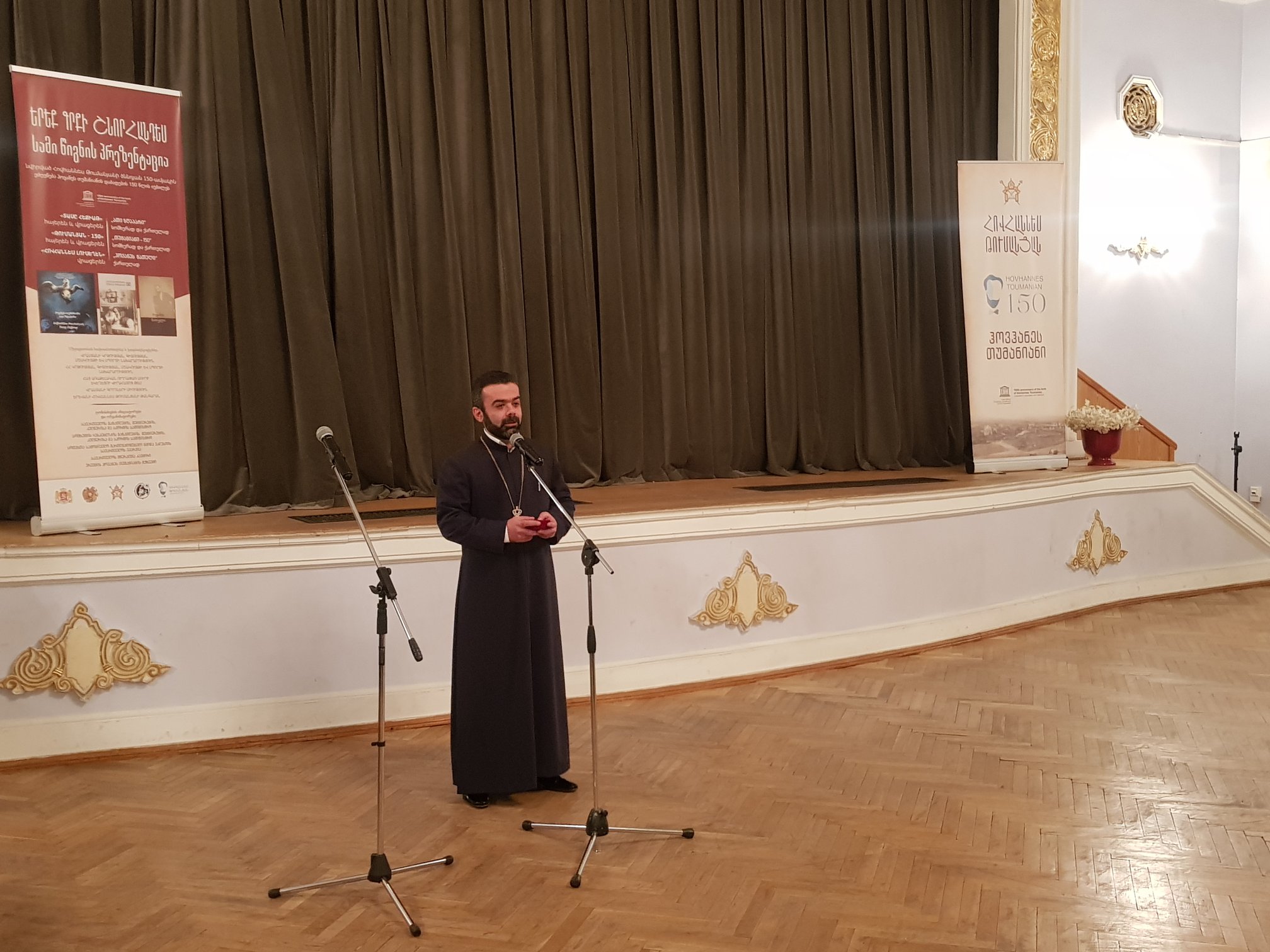 Implementation of anniversary celebrations, joint events held out of the Motherland is one of the best ways to maintain the national values, present them and spread among Armenians worldwide. The jubilee commission which included the representatives of Armenian organizations in Tbilisi and Armenian-populated regions, under the leadership of the former Primate of the Armenian Diocese in Georgia, His Grace Bishop Vazgen Mirzakhanyan, had organized events dedicated to the celebration of Tumanyan’s and Komitas Archimandrite’s anniversaries in Tbilisi, Akhalkalaki, Ninotsminda, Akhatsikhe, Batumi, Marneuli and other Armenian-populated settlements; almost weekly events were held in the “House of Hovhannes Tumanyan”, “Hayartun” and “Rafael Javakh” Centers.

On behalf of the jubilee commission, deep gratitude was addressed to His Grace Bishop Vazgen Mirzakhanyan for planning, coordinating and partially implementing the events under his leadership.

The Vicar of the Armenian Diocese in Georgia, Rev. Father Archimandrite Kirakos Davtyan received “Hovhannes Tumanyan-150” medal for his fatherly blessings and support to the implementation of jubilee events. “Tumanyan-150” medal was given by Tumanyan Museum in Yerevan to poet and translator Givi Shahnazar; Maghvala Gonashvili, co-chair of Georgia Writers’ Association; Gisane Hovsepyan, head of the “House of Hovhannes Tumanyan” Center. And Tumanyan’s granddaughter Alyona Kolesnikova gifted family relics to the “House of Hovhannes Tumanyan” Center.

The presentation event was conducted by the head of the “House of Hovhannes Tumanyan” Center Gisane Hovsepyan and Suren Abramyan, director of Department of Culture of the Armenian Diocese in Georgia. 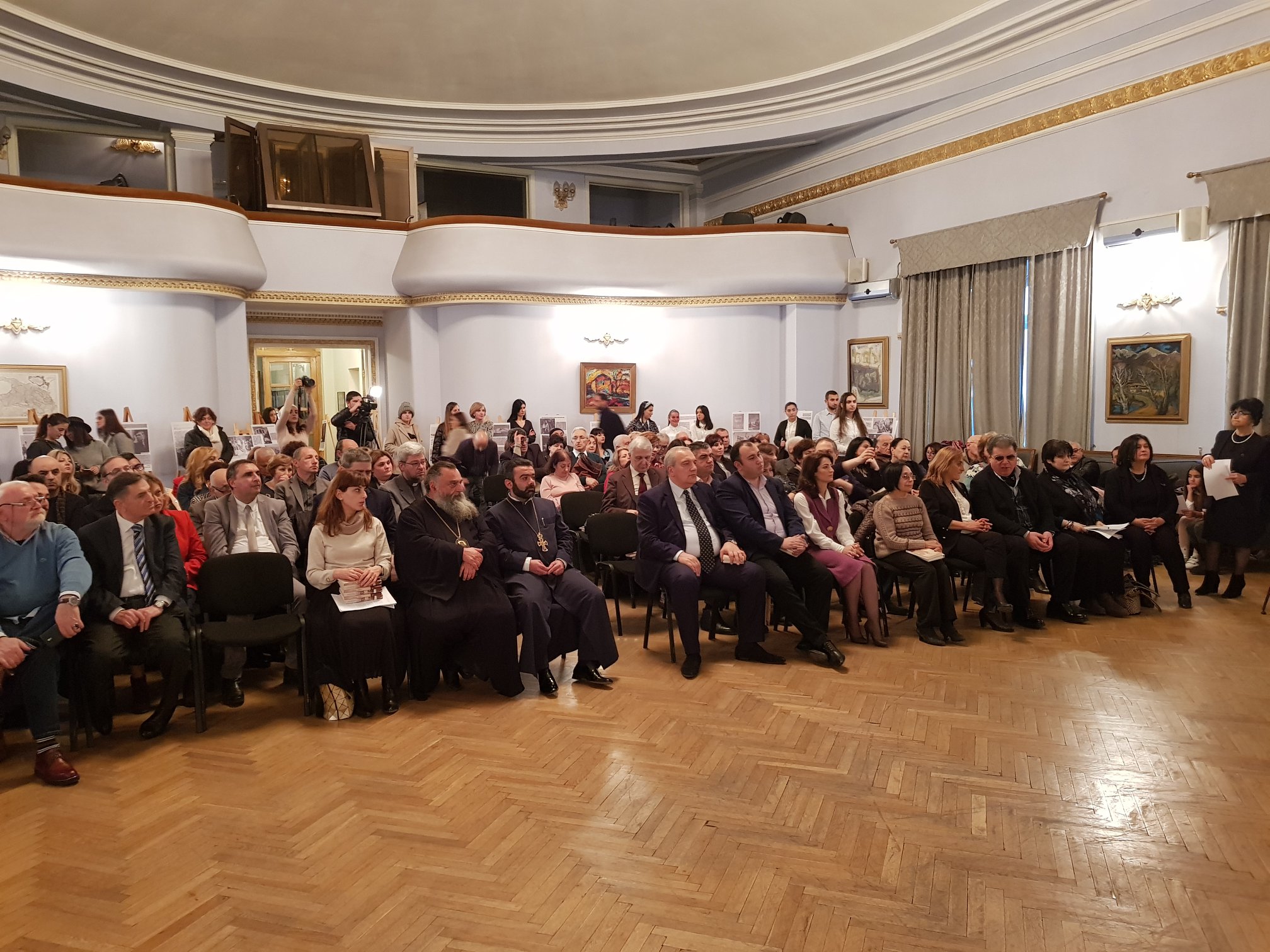