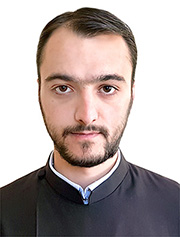 Deacon Yeghishe Harutyunyan was born on December 16, 1994 in Tbilisi, Georgia.

From 2000 to 2009, he studied at the Armenian sector of the Armenian-Russian secondary school № 110 in Tbilisi, Georgia.

In 2012, he attended the preparatory course of Trbanjyan Seminary of Harich of the Mother See of Holy Etchmiadzin, in Gyumri, Armenia.

From 2012 to 2016, he studied at the Vazgenian Theological Seminary of Sevan, Armenia, and received the Bachelor degree.

On December 25, 2016, on the Feast of Saint Stephen the First Deacon, he was ordained as a deacon by His Grace Bishop Mushegh Babayan in the Mother See of Holy Etchmiadzin.

From 2016 to 2018, Deacon Yeghishe Harutyunyan studied at the Gevorgian Seminary-Academy of Mother See of Holy Etchmiadzin, Armenia and received the Master degree.

In 2018, by the order of His Holiness Karekin II, Supreme Patriarch and Catholicos of All Armenians, Deacon Yeghishe Harutyunyan was appointed to serve at the Diocese of the Armenian Apostolic Orthodox Holy Church in Georgia, under the authority and supervision of the Primate of the Diocese.

On July 1, 2018, by the order of His Grace Bishop Vazgen Mirzakanyan, the Primate of the Diocese of the Armenian Apostolic Orthodox Holy Church in Georgia, he was appointed to serve at St. Etchmiadzin Church in Tbilisi, Georgia, as the Senior Sacristan.

Since 2019, by the order of Very Reverend Archimandrite Father Kirakos Davtyan, the Locum Tenens of the Diocese of the Armenian Apostolic Orthodox Holy Church in Georgia, Deacon Yeghishe Harutyunyan serves at St. Etchmiadzin Church in Tbilisi, Georgia.