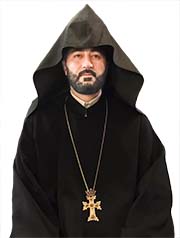 1992-2002 Studied at secondary school N9 after Raphael Patkanyan in Etchmiadzin.

2002-2008 In 2002, he studied at Vaskenian Theological Academy at Lake Sevan, afterwards, in 2006, he continued his studies in Gevorkian Theological Seminary, from which he successfully graduated in 2008, defended thesis on “The semantic aspects of prepositions in the quartet Gospels” with excellent marks.

2007      On December 25, on the Feast of St. Stephan, he was ordained to the diaconate by the Primate of the Armenian Diocese in Russia and New Nakhichevan, His Grace Bishop Yerzas Nersisyan.

2008-2009 He served as secretary in Vaskenian Theological Academy at Lake Sevan, teaching the “Saints’ Behavior” subject at the same time.

2009 On July 19, on the Feast of Transfiguration of Our Lord Jesus Christ, he was ordained as a celibate priest and was named Nshan by the Primate of the Eastern Armenian Diocese in America Khajak Parsamyan.

2010 With the blessings of His Holiness Karekin II, Supreme Patriarch and Catholicos of All Armenians and sponsorship of Cafesjian Family Foundation, he moved to the USA to continue his theological studies deepening his knowledge in “Paulology” at the University of St. Thomas, Saint Paul city, Minnesota state.

2012 The subject of Paulology was introduced in the Gevorkian Theological Seminary, he became the first lecturer of that subject. To facilitate and make easy the teaching of the subject in the seminary, he translated “Introduction to Paulology” textbook by David Horley from English into Armenian.

2015 He defended a thesis on “Colossian: 15-20, Christian hymn” topic, was ordained to the diaconate by the Primate of the Armenian Diocese in Russia and New Nakhichevan, His Grace Bishop Yerzas Nersisyan.

2017-2020 Served at the Vaskenian Theological Academy at Lake Sevan as a spiritual superintendent, teaching the “Armenian Church History” subject.

2021 From June 1, by the order of His Holiness Karekin II, Supreme Patriarch and Catholicos of All Armenians, was appointed to serve in the Armenian Diocese in Georgia as assistant to the Diocesan Primate.

2022 From May 25, by the order of the Primate of the Armenian Diocese in Georgia, was ceased to implement his responsibilities as the assistant to the Diocesan Primate and was appointed to serve as the General Prelate at Samtskhe-Javakheti and Tsalka’s General Prelacy.