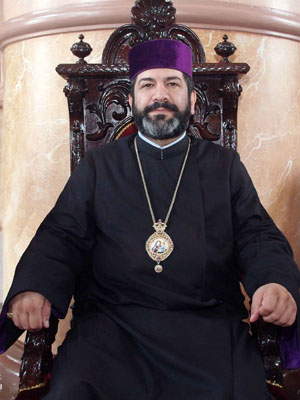 From 1982 to 1989, he studied at the Gevorkian Theological Seminary of the Mother See of Holy Etchmiadzin.

On May 7, 1989, he was ordained as a deacon by His Grace Archbishop Housik Santourian.

In 1990, he successfully defended his final theses entitled “The life and Literary Heritage of Archimandrite Grigor Skearatsi” and got an excellent mark.

From 1993 to 1995, he served as the Executive Director of the Sunday Schools affiliated with the Mother See of Holy Etchmiadzin in Araratian Pontifical Diocese.

From 1995 to 1999, by the order of Karekin I Sarkisian, Catholicos of All Armenians, he was appointed to serve as the Director of the Christian Education Center of the Mother See of Holy Etchmiadzin. Until the end of implementation of his duties, he organized the retraining of teachers of Christian Religion in the various schools of Armenia and Artsakh. During that period 26 books of spiritual content, textbooks on religion, and teacher’s manuals were published by the Christian Educational Center. The “Christian Armenia” biweekly newspaper was established, as well as the broadcasts of “Love each other” (“Siretsek Zmimeans”) daily religious program, the “Altar of Light” (“Khorhan Lusoy”) Saturday’s morning program for children and the “Morning of Light” (“Aravoud Lousoy”) Sunday’s morning religious program.

In 1996, he successfully defended his Doctoral thesis entitled “The Quotation Sources of the Books “Hartsmants” (“Book of Questions”) and “Voskeporik” by St. Gregory of Tatev” and  received the rank of Archimandrite (Vardapet) by Karekin I Sarkisyan, at the Holy Altar of the Mother Cathedral of the Mother See of Holy Etchmiadzin.

On December 1, 1999, by the order of Karekin II Nersisyan, Catholicos of All Armenians he was appointed to serve at the Diocese of Armenian Apostolic Orthodox Holy Churchin Aragatsotn, Armenia.

From 2000 to 2002, under leadership of Archimandrite Vazgen Mirzakhanian, the Monasteries of Mօughni and Saghmosavank, Surb Hovhannes (St. John) Church in Byurakan, Surb Khach (Holy Cross) Church in Aparan and St. Mesrop Mashtots Church in Oshakan were fully repaired and re-consecrated, as well as the  biweekly newspaper “Aragatsotn” was established.

During the same period, with the support of the Mother See of Holy Etchmiadzin and Aragatsotn regional authorities, Archimandrite Vazgen Mirzakhanian organized and implemented the teaching of the Christian Religion subject in the public schools of Aragatsotn region, Armenia.

On September 4, 2002, by the order of Karekin II Nersisyan, Catholicos of All Armenians, Archimandrite Vazgen Mirzakhanian was appointed to serve at the Diocese of the Armenian Apostolic Orthodox Holy Church in Georgia as the Primate.

On June 23, 2003, Karekin II Nersisyan, Catholicos of All Armenians, consecrated him as Bishop.

In 2012, due to the great efforts of Bishop Vazgen Mirzakhanian, the Georgian parliament passed a law allowing religious communities in Georgia to receive Special Status. Based on that law, on March 12, 2012, the Diocese of the Armenian Apostolic Orthodox Holy Church in Georgia is registered in the Public Registry of the Ministry of Justice of Georgia as a legal entity under Public Law.

In 2014, due to the great efforts of Bishop Vazgen Mirzakhanian, the Vicariate of the Armenian Apostolic Orthodox Holy Church of  Samtskhe-Javakheti and Tsalka’s was also r egistered in the Public Registry of the Ministry of Justice of Georgia as a legal entity under Public Law.

In 2017, Bishop Vazgen Mirzakhanian was awarded the Medal of “Andranik Ozanian” by the Ministry of Defense of Republic of Armenia.

In 2018, Karekin II Nersisyan, Catholicos of All Armenians, appointed Bishop Mirzakhanian to serve as the Chairman of the Armenia-Diaspora Committee.

From 2002 to 2019, about 46 churches and chapels of the Diocese of the Armenian Apostolic Orthodox Holy Church in Georgia were built, renovated and consecrated in Tbilisi, Akhaltsikhe, Akhalkalaki, Aspindza, Batumi, Tetri -Tsgharo, Tsalka, Marneuli, Ninotsminda cities and regions. Among those churches, it is important particular to mention that the Cathedral of St. George and St. Etchmiadzin in Tbilisi have been completely renovated.

“Vazgen I Catholicos of All Armenians” Cultural, Educational Center,

To make the Diocesan activity effective, Educational, Cultural and Youth, Media and Press, Legal and Cooperation, Financial, Administrative, Economic and Social Departments were established, a flexible management system was implemented. The Diocese was replenished with priests and deacons, the number of staff increased.

The “Norashen” journal was published and more than a dozen valuable books and albums were published as a result of the collaboration between “Vernatun” Union of Armenian Writers of Georgia, “Lori Canyon” compatriotic union and state and public organizations, films were shot about Georgian famous and historical figures. The website of the Diocese was established by the order of Bishop Vazgen Mirzakhanian.

During the mentioned period, dozens of cross-stones (khachkars) and monuments were erected and consecrated in different Armenian-populated regions of Georgia. Negotiations with the Georgian Government and the Patriarchate were held regularly on the issues of the preservation of Armenian historical and cultural monuments and their restoration to the Diocese.

In June 2019, upon his request, Karekin II Nersisyan, Catholicos of All Armenians, transferred Bishop Vazgen Mirzakhanian back to the Mother See of Holy Etchmiadzin.

In 2019, Karekin II Nersisyan, Catholicos of All Armenians appointed Bishop Vazgen Mirzakhanian at the Conceptual Affairs Office of Mother See of Holy Etchmiadzin, as the Director.