Feast of the Cathedral of Holy Etchmiadzin 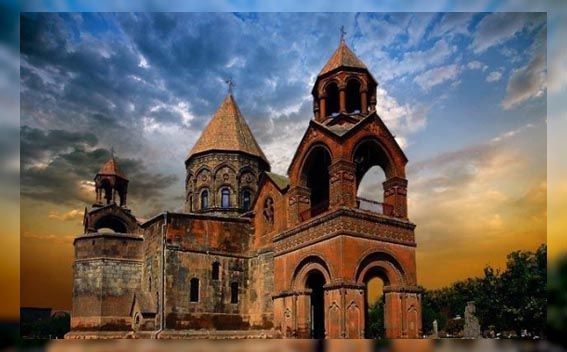 One of the most celebrated feasts of the Armenian Church is the day when the Cathedral of Holy Etchmiadzin was established, according to the inspired vision of St. Gregory the Illuminator.

According to tradition, and hagiographic sources, following the declaration of Christianity as the Official Religion of Armenia in 301 AD, St. Gregory has a famous vision, wherein the Only Begotten Son of God – Jesus Christ, descends from Heaven, his face lit aglow, and with the strike of a golden hammer designates the site where the Mother Cathedral for the entire Armenian nation is to be founded. Hence, the name of the spiritual center for the Armenians, “Etchmiadzin”, means “the Descent of the Only Begotten” (Etch - descent, mi - only, dzin - begotten.)

St. Gregory relayed the story about his vision to the Armenian King Tiridates, under whose royal auspices and support the Cathedral of Holy Etchmiadzin was built.  King Tiridates and Queen Ashkhen participated in the construction, as did the entire capital city of Vagharshapat by bringing stones from the biblical mountain of Ararat to lay the foundations.  In the site marked by Christ, a Holy Altar of Descent was built.
According of Patriarch Malachia Ormanian, from the days of her establishment, the Cathedral of Holy Etchmiadzin has been the residence of the Supreme Patriarch and Catholicos of All Armenians.  Thus, it is the Mother See of the Armenian Church, and as such, her universal, spiritual and administrative headquarters.

Another title bestowed upon the cathedral is “Catholic” - not to be confused with the Roman Catholic faith.  Catholic is a Greek word meaning “Universal”. Theologically, the cathedral has been called “catholic” as a description of the catholicity (universality) of the Church.

The feast of the Cathedral of Holy Etchmiadzin is celebrated 64 days following Easter.  A Divine Liturgy is celebrated, and during services, a special hymn is sung, written by the eighth century Catholicos Sahak of Dzorap, telling of St. Gregory’s vision and the Cathedral’s construction.