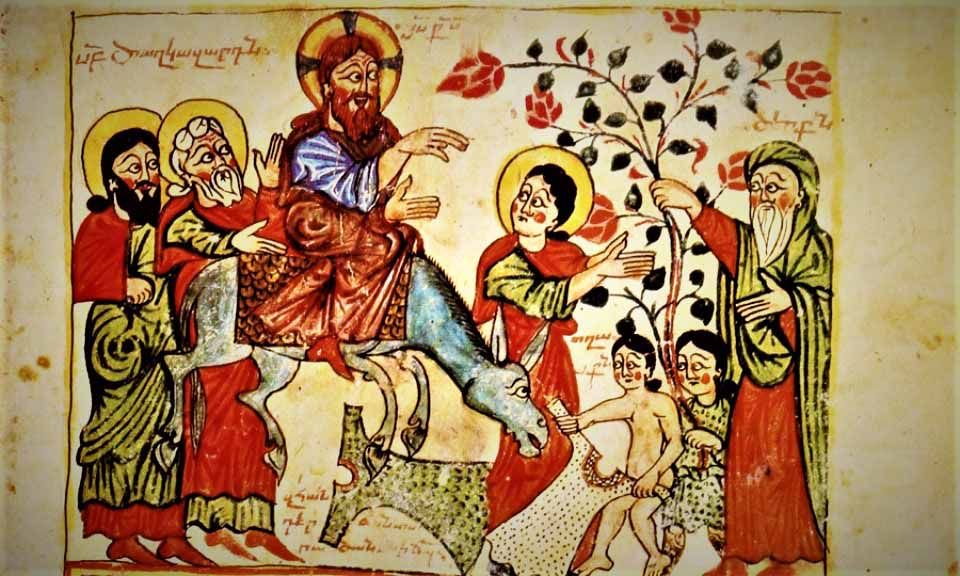 On the Sunday following the Feast of the Ascension of Our Lord, the Armenian Church celebrates “Second” Palm Sunday. The name of the feast has been derived from Palm Sunday, which precedes Easter.  In the week leading up to His betrayal, crucifixion and resurrection, the “first” Palm Sunday symbolized the triumphant entry of Christ into Jerusalem where people met Him with great joy and glorified His Holy Name.  The Second Palm Sunday is the commemoration of the triumphant entry of the Ascended Christ into the Heavenly Jerusalem, where the angels meet him with great happiness and delight.

According to tradition, during St. Gregory the Illuminator’s imprisonment in the pit, he was visited every day by the same angel. However one day, the angel did not come. The following morning, St. Gregory inquires to the reason for his absence, to which the angel responds that during the Ascension, Christ had passed through the ranks of the Angels, and they celebrate that feast each year. The angel visiting St. Gregory was from the fourth class of angelic hosts, and thus, on the fourth day following the Ascension, his rank of angels commemorates and celebrates Christ’s Ascension to heaven every year.

St. Gregory of Datev, one of the greatest theologians of the Armenian Church, has a famous interpretation of this event. Prior to His Ascension, the ranks of angels, except for the lowest class, who served Christ during His earthly life, were not aware of Christ’s incarnation for the salvation of man. St. Gregory’s commentary states that when the Lord was passing through the ranks of angels, they were surprised and asked, “Who was that powerful king?” The angels accompanying Christ thus informed them. This dialogue of angels is presented in the Holy Bible, in the book of Psalms:

Second Palm Sunday is one more reminder of the Ascension of Christ and grants us the hope for ascending to heaven after our deaths, and being in the bliss of God’s presence.

Feast of Ascension of Our Lord Jesus Christ 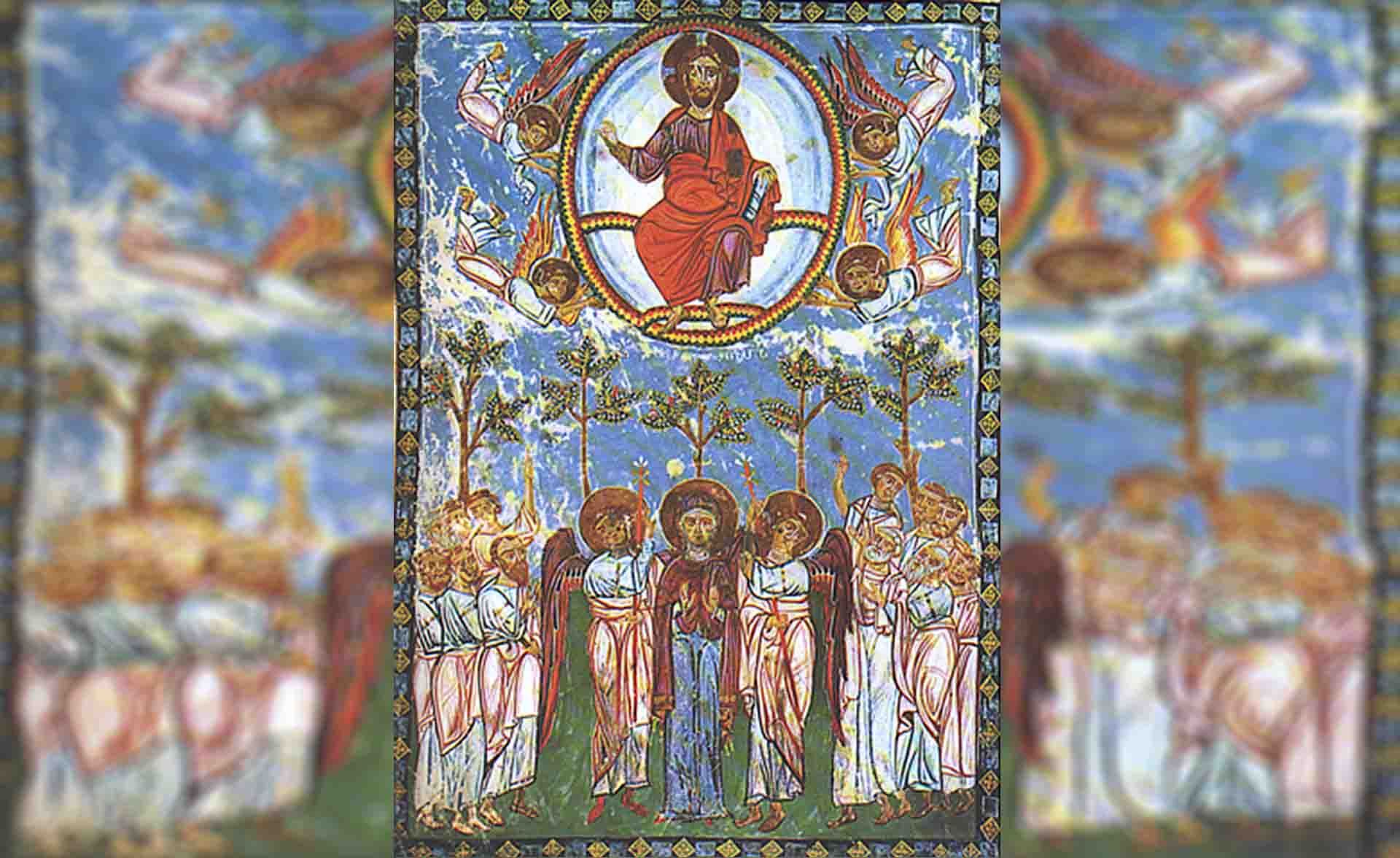 Following His Resurrection and defeat of death, Christ remained on earth for forty days, and continued to appear to His disciples. On the fortieth day, Christ is seen by His disciples for the last time. He blesses them and leaves them with instructions, after which He ascends into heaven.

Two of the Gospel writers, St. Mark and St. Luke, testify about Christ’s ascension. There is also an account of it in the Acts of the Apostles.

Following a final meeting of Christ with the eleven remaining apostles, St. Mark writes, “So then, after the Lord had spoken unto them, he was received up into heaven, and sat on the right hand of God.” (Mark 16:19)

St. Luke gives a little greater detail as he writes, “And he led them out as far as to Bethany, and he lifted up his hands, and blessed them. And it came to pass, while he blessed them, he was parted from them, and carried up into heaven. And they worshipped him, and returned to Jerusalem with great joy, and were continually in the temple, praising and blessing God. Amen.” (Luke 24: 50-53)

But by far the most beautiful account of the Ascension can be found in the Book of Acts:  “And when he had spoken these things, while they beheld, he was taken up; and a cloud received him out of their sight. And while they looked steadfastly toward heaven as he went up, behold, two men stood by them in white apparel; which also said, Ye men of Galilee, why stand ye gazing up into heaven? This same Jesus, which is taken up from you into heaven, shall so come in like manner as ye have seen him go into heaven.” (Acts 1:9-11)

The hymn that is sung in the Armenian Church on Ascension Day mentions the miraculous event of Christ’s Ascension into heaven and the descent of the Holy Spirit on the Apostles.

In the Armenian Church, the day of Jesus Christ’s Ascension is also commemorated for another reason as well. On this date in 1441, the See of the Catholicosate of All Armenians was returned to its historical origins. Following a resolution of the National Assembly gathered in Vagharshapad, the Patriarchal See was relocated from the city of Sis in Western Armenia to the Mother See of Holy Etchmiadzin. Following his vision of Christ striking the ground with a golden hammer, St. Gregory the Illuminator had founded the Cathedral of Holy Etchmiadzin in 303.  However, less than 200 years later, in 484, the Patriarchal See was forced to relocate, and for the next 1000 years, settled in various cities throughout Armenia.  The decision to return the throne of the Catholicos to the Mother See of Holy Etchmiadzin was the fulfillment of a national dream for the Armenian people.

Feast of Apparition of the Holy Cross 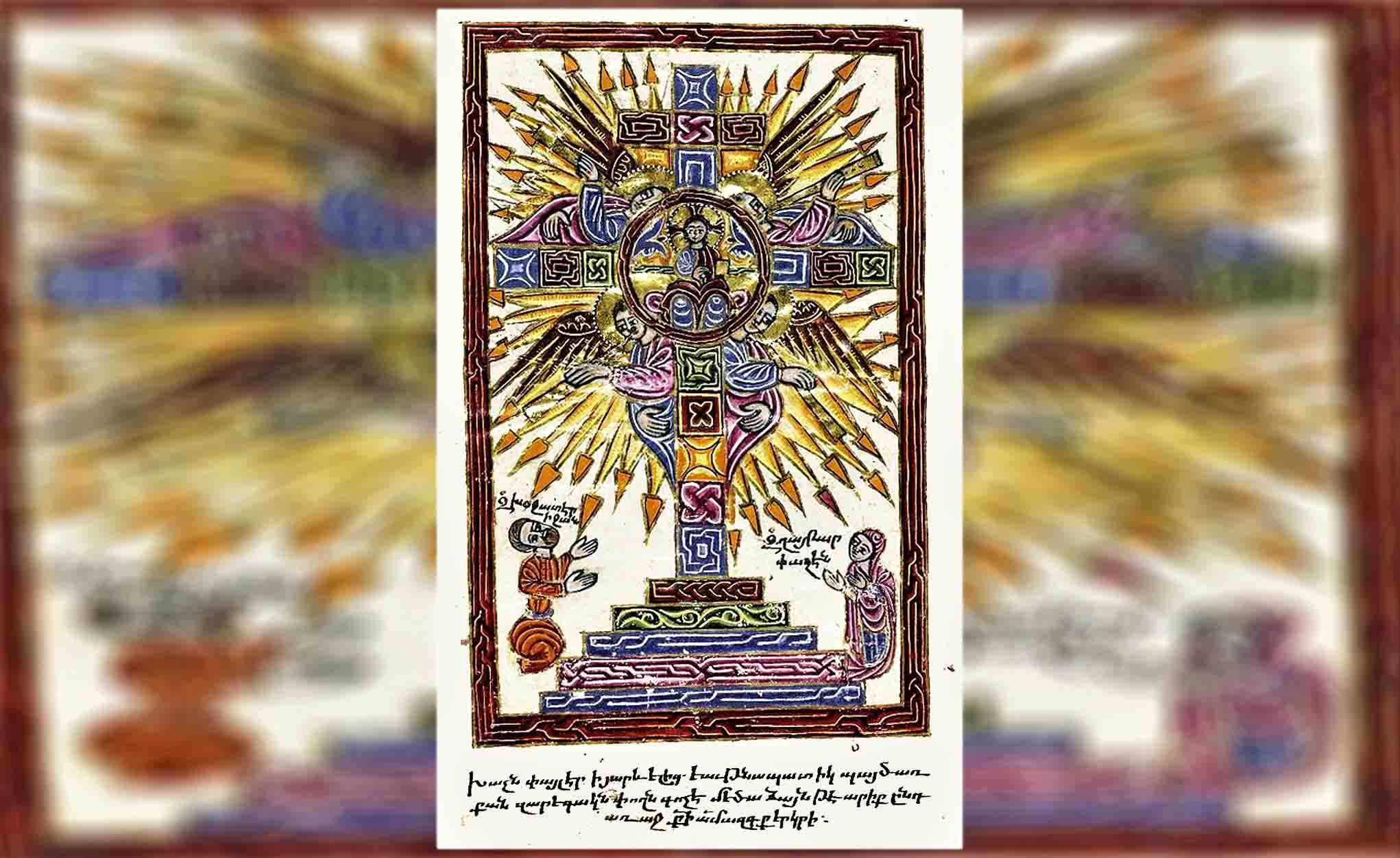 This feast is dedicated to the Apparition of the Holy Cross in Jerusalem. At noon on May 19, 351, a bright, luminous cross appeared over the skies of Jerusalem, centered over an area spanning from the Mount of Olives (where Christ was betrayed and arrested) to Golgotha (where Christ was crucified). Awestruck, the faithful of Jerusalem rush to church to give thanks and glorify the Lord. Bishop Cyril (later St. Cyril of Jerusalem) subsequently wrote a letter to Emperor Constantine of Byzantium wherein he describes the miraculous and beautiful scene. St. Cyril tells Constantine that the apparition is a true testimony of the orthodox faith of Christianity.

Further, St. Cyril exhorts the Emperor that the appearance is a sign for him to remain steadfast in his faith, and to stop defending the heretical movement of Arianism and its promulgators. The Armenian translation of the Bishop’s letter has been preserved by the Church, and is read each year on the Feast of the Apparition of the Holy Cross. The Armenian Church celebrates this feast 28 days following Easter Sunday. 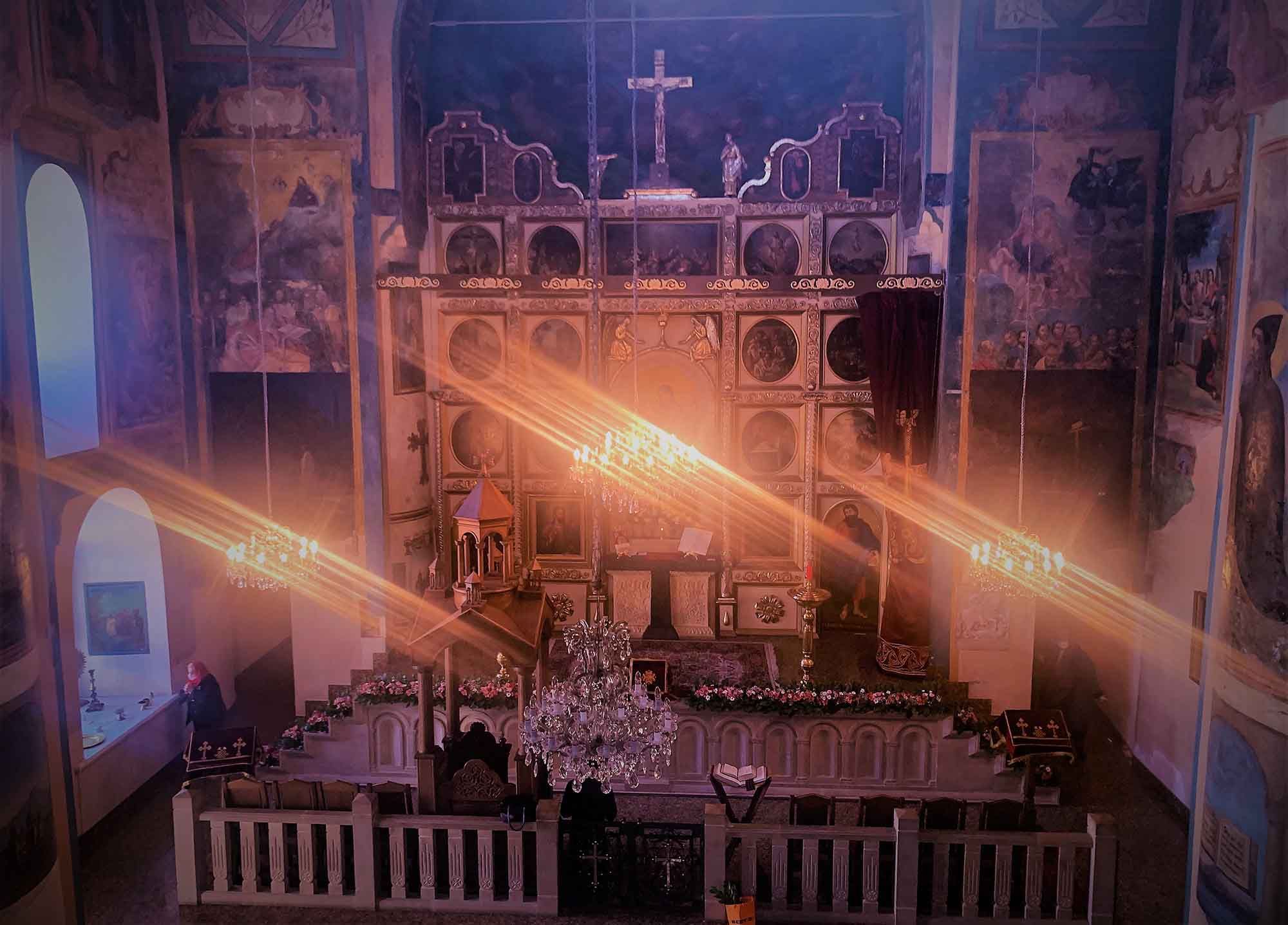 In the Calendar of the Armenian Church, the third Sunday following the Glorious Resurrection of Our Lord Jesus Christ is known as Red Sunday.

The color “red” has been used throughout history to represent many things. One of the symbolic meanings is the blood of the martyrs who were sacrificed for Christ, His Holy Church, and their Christian faith. During the early years of Christianity, faithful followers of Jesus Christ were subjected to severe persecutions and torments. Many elected to die rather than betray their principles of life and faith, which the Incarnate God - Christ Jesus - had endowed to them and all of mankind. The psalmist writes, “Precious in the sight of the Lord is the death of the saints” (Psalms 116:15).

Today, martyrdom is far less often an occurrence in the lives of Christians, yet it does happen. However, the greater struggle is the one against sin, which we can see manifested in many ways throughout the world. The battle against wickedness and evil, which will be victorious in the end, is the current expression of the significance of Red Sunday. The Apostle Paul writes that Christ Himself endured such opposition, that we should not grow weary in our battle against wickedness. In his letter to the Hebrews, Paul says: “In your struggle against sin, you have not yet resisted to the point of shedding your blood.” (Hebrews 12:4). We are to use the opportunity of Red Sunday to once again remind ourselves of Paul’s exhortation to remain steadfast in the Lord, and to continue our daily labors of goodness and righteousness.