Commemoration of the Apostle Thaddeus and the Virgin Sandoukht 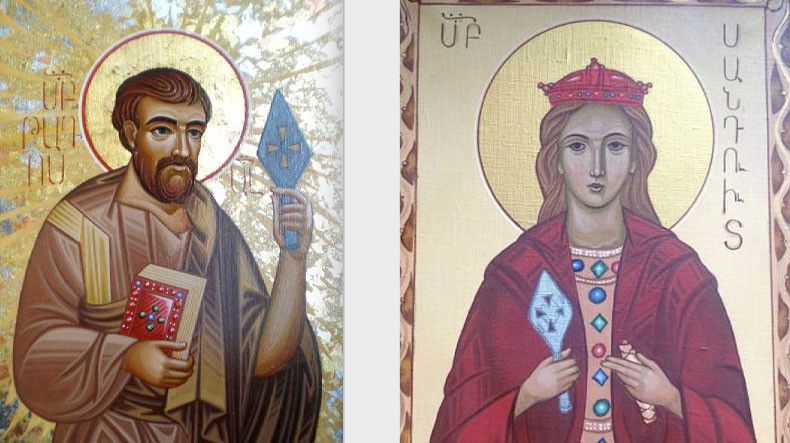 St. Thaddeus the Apostle and St. Sandoukht the Virgin are two of the most venerated saints in the Armenian Church, as the “Great Conversion” of the Armenian nation to Christianity is significantly connected with their names.

Following the Ascension of Christ, according to the Lord’s message: “Go then to all peoples everywhere and make them make them my disciples...”, Thaddeus departs for Edessa.  There he preaches the Gospel, and among his numerous miracles, also heals the king of Osrhoene named Abgar.  In the year 44 A.D., Thaddeus travels on to Armenia and enters the domain of the pagan King Sanatrouk.  After preaching in various parts of Armenia, St. Thaddeus converts many to Christianity, who become the foundation for the Armenian Church.  The Apostle Thaddeus, while in the region of Artaz, gains access to the royal palace and converts Princess Sandoukht, the daughter of the king, to Christianity.

The Armenian King Sanatrouk becomes aware of his daughter’s conversion and exhorts her to return to her native heathen religion, but his efforts are in vain.  The enraged king imprisons both the Virgin Sandoukht and St. Thaddeus and subjects them to severe torments.  Another effort is made to persuade the Virgin to give up Christianity by the governor of the royal palace, an Armenian prince.  This effort only ends with the prince becoming a Christian as well.  The king, able to bear no more, finally orders the death of the Apostle Thaddeus and his own daughter, Sandoukht.  They are martyred together in Shavarshan, the summer residence of the royal family.