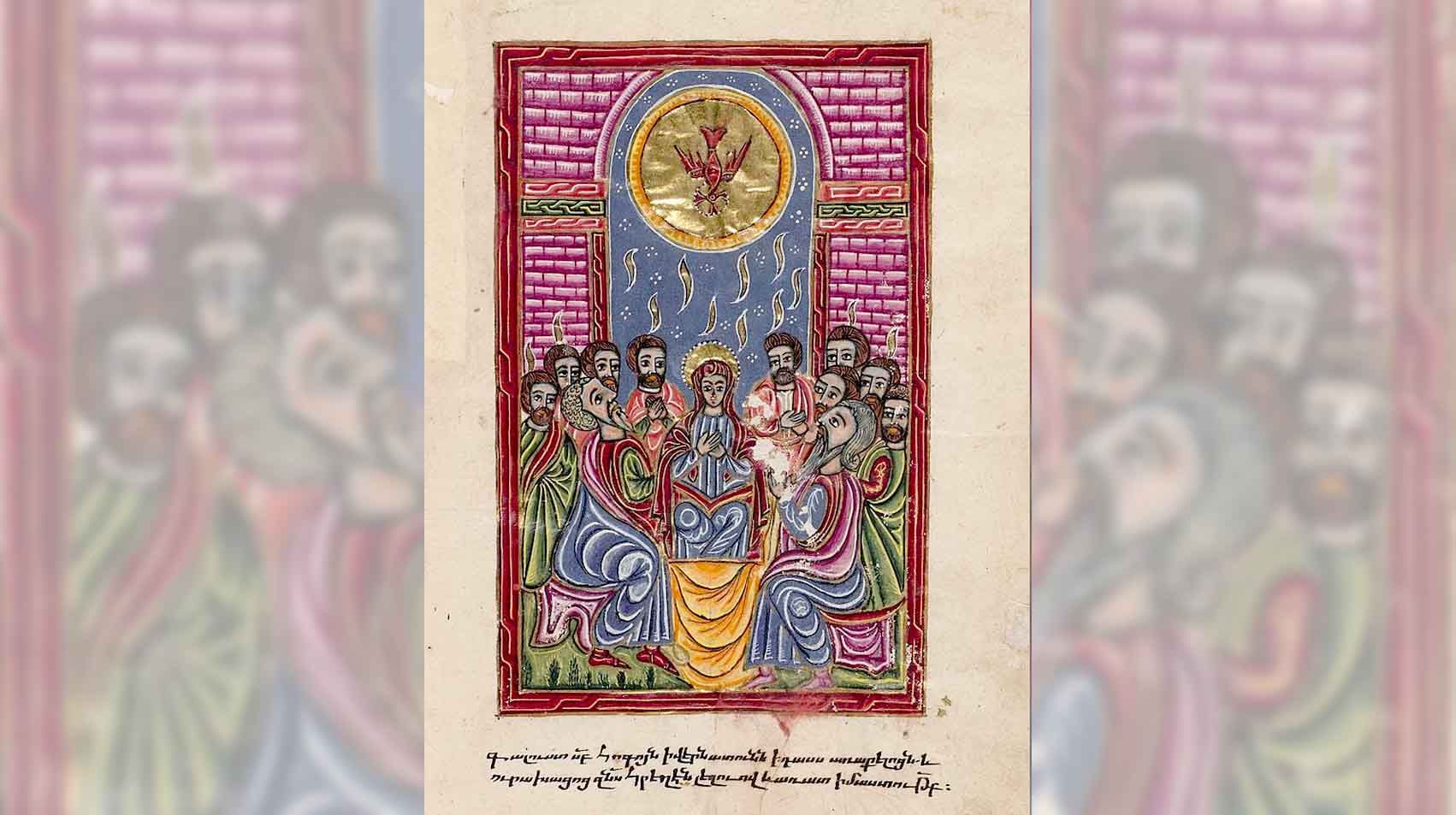 The Feast of Pentecost is the commemoration of the descent of the Holy Spirit upon the Apostles on the fiftieth day following the Feast of the Glorious Resurrection of Our Lord Jesus Christ. The Armenian Church celebrates this feast 50 days following Easter Sunday.

The Holy Spirit is one of the three persons in the Holy Trinity coexisting with, and equal to, the Holy Father and the Holy Son. During His earthly life and ministry Christ spoke to the Apostles about the coming of the Holy Spirit.  Recording the words of Christ, St. John writes, “The Comforter, the Holy Spirit, whom the Father will send in my name, will teach you everything and make you remember all that I have told you.” (John 14:26).

The descent of the Holy Spirit is described in the Acts of the Apostles: “When the day of the Pentecost came, all the believers were gathered together in one place.  Suddenly there was a noise from the sky which sounded like a strong wind blowing, and it filled the whole house where they were sitting. Then they saw what looked like tongues of fire which spread out and touched each person there. They were all filled with the Holy Spirit and began to talk in other languages, as the Spirit enabled them to speak.  (Acts 2:1-4).

In the book of Acts, St. Luke further records the names of various countries, and that men from those countries were surprised, when each of them heard his native language. Among the mentioned places are Mesopotamia, Judea and Cappadocia (Acts 2:9). Two of the saints of the Universal Church, both of Roman origin, Tertullian and Augustine, have written that the word “Armenia” should possibly be substituted instead of “Judea”, as it is more logical that Armenia would be mentioned among those as a “foreign” country, as the apostles were living in Judea.  Moreover, with regards to geographical position, Armenia was situated between Mesopotamia and Cappadocia. Therefore, the people living in Armenia may have been among the first witnesses of the gifts of the Holy Spirit.

Among the Armenian Church songs and hymns, two are dedicated to the Feast of Pentecost: “The Sent Dove” (referring to the Holy Spirit in the form of a dove that descended upon Christ during His Baptism) and “Indivisible Trinity”. These are sung during the Morning Service on the feast day. Also, during the Evening Service, the “Andastan” rite of the blessing of the four corners of the world is conducted. It is during this service that a prayer written by 12th century Armenian Church father Nerses of Lambron, is read.

In the Christian Church the teaching of divine grace is related to the Holy Spirit.  According to that instruction, each virtue is a divine grace granted to the faithful by the Holy Spirit. Thus, ascribing any virtue to one’s own self, and not to God, is a grave sin and can be manifested in another, which is pride. Hence, commemoration of Pentecost is also an appeal to the faithful to avoid pride and instead, use the divine graces in life for righteous purposes and moral goals.

One of the four season fasting periods defined by the Armenian Apostolic Church is the fasting period preceding the beginning of summer. This fasting period, as well as the other ones preceding the other seasons of the year, is not preparation for any feast, and according to the tradition is called Elijah’s fast, as coincides the feast of commemoration the Prophet Elijah the next Sunday.