Feast of the Holy Translators St. Sahak and St. Mesrop 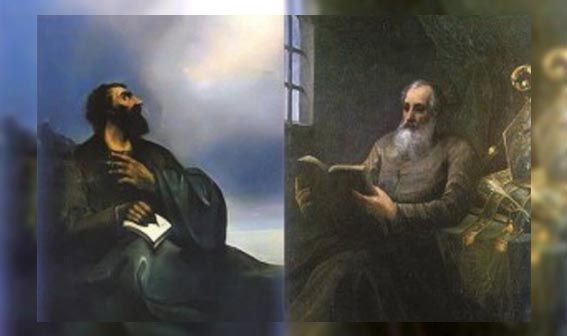 St. Sahak Partev was the elder son of Catholicos St. Nersess the Great, and the last Catholicos of the Armenian Church who descended from the lineage of St. Gregory the Illuminator.  He became Catholicos of All Armenians in 387 A.D., and reigned for an astounding 52 years. Being talented in music, and educated in the rhetorical arts, philosophy and linguistics, St. Sahak greatly contributed to the development of Armenian national culture. He was the strongest advocate for the creation of an Armenian Alphabet, and became its chief patron.
St. Mesrop Mashtots was born in 360 A.D. and studied the Greek and Persian languages from childhood.  He initially served as a scribe in the royal court. Leaving secular life behind, he becomes a monk and lives an ascetic life.  During his preaching of the Gospel, St. Mesrop feels the necessity to create a distinct Armenian Alphabet and to have the Holy Bible translated into Armenian. For in those years, the Bible was only available in Greek and Syriac. In Armenia, there once were ciphers, or symbols, which were used by the former pagan priests. Following the Great Conversion of the Armenian nation to Christianity, the symbols fell into disuse, and the only remaining copy was in Mesopotamia with a bishop named Daniel the Syrian. Upon the order of King Vramshapouh, the symbols are brought to Armenia from Bishop Daniel. However, while teaching his new students by means of those symbols for a short period of time, Mesrop soon finds them to be lacking, as they were imperfect and defective. Together with his students he departs for Mesopotamia, and visits the cities of Antioch, Edessa, and Samosata, to conduct further research. In 404/405 A.D., St. Mesrop creates the Armenian Alphabet through Divine Grace.  For the first time in the history of the nation, the Armenian people had a specific and distinctive alphabet.

Following the creation of the Armenian Alphabet, St. Sahak and St. Mesrop opened a school for translators in the city of Vagharshapat (Etchmiadzin). There they begin the translation of the Holy Bible into Armenian and did it so perfectly, that centuries hence the Armenian Translation is called the “Queen Translation of the Breath of God”. The first sentence translated from the Holy Bible is the opening verse of the Book of Proverbs: “To know wisdom and instruction, to perceive the words of understanding”.
St. Mesrop Mashtots passed away in Vagharshapat, and was buried in his home village of Oshakan.  According to tradition, during the entire journey of transferring the remains of

St. Mesrop to Oshakan, a canopy of light fell upon the pilgrims and accompanied them until they reached the tomb. The Church of St. Mesrop Mashtots, which exists to this day, was built over his grave.