About the Great Lent 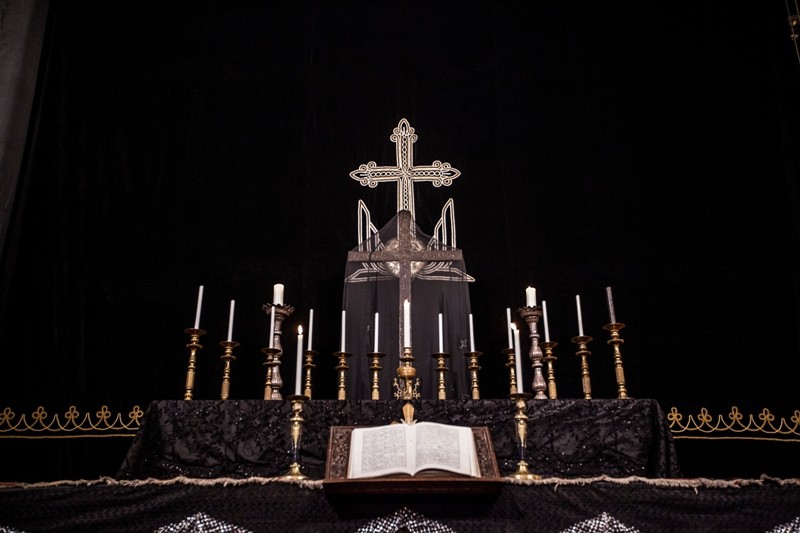 During the fasting period people eat exceptionally food of vegetable origin.
During the fasting period people not only refuse of certain kinds of food, but also of ill habits – talkativeness, lying, swearing and other sins.
Refusing from food without avoiding of sins is useless. “Satan always fasts, it does not eat anything and however, it does not and is not tired of sinning,” says St Gregory of Tatev. During the Sermon on the Mount Jesus says the following about fasting: “Moreover when you fast, be not, as the hypocrites, of a sad countenance: for they disfigure their faces, that they may appear unto men to fast. Verily I say unto you, they have their reward. But you, when you fast, anoint your head, and wash your face; that you appear not unto men to fast, but unto your Father which is in secret: and your Father, which sees in secret, shall reward you openly.” (Mt 6:16-18). Our Lord Jesus Christ teaches us the way of fasting. As disease makes influence on the body in the same way sin makes influence on the soul. It is not fasting that atones the sin. It is God that gives absolution to sins. However, fasting is important in giving absolution to sins. Repentance, prayer and confession are the main conditions for receiving absolution of sins.
Forty days of fasting period symbolize Christ’s 40-day lasting period of abstinence and repentance in the desert. After His baptism Jesus “was led by the Spirit into the wilderness, being forty days tempted of the devil and in those days he did eat nothing” (Lk 4:1-3). Jesus subjected Himself to abstinence for the salvation of mankind, He repented instead of mankind so that penitence of all those who fast should gain sense and be realized by means of His abstinence. Another period of fasting lasting for a week follows the 40-day fasting period. It is the Holy Week. That is why the forty-day called fasting period lasts 48 days.
The period of Great Lent consists of seven remarkable Sundays: Eve of Great Lent, Sunday of Expulsion, Sunday of the Lost (Prodigal) Son, Sunday of the Steward, Sunday of the Judge, Sunday of Advent and Palm Sunday.
The 24th day or the fourth Wednesday of the period of Great Lent is called Mijink symbolizing that first half of the period of Great Lent has already passed. This year Mijink is on March 11. That day fasting is not stopped. According to folk tradition the housewives bake unleavened cake and put a coin in it while baking. The current year will be successful for the member of the family who will have the coin in his/her portion.
According to ancient traditions marriage and offering sacrifice were forbidden during the period of Great Lent. However, by the pontifical encyclical of Vazken A Catholicos of all Armenians it was permitted in case of extreme necessity to perform the sacrament of marriage during the period of Great Lent and on Sundays except all days of the Holy Week.