The Armenian-populated village Abul is located in Akhalkalak district of Samtskhe-Javakheti, between Akhalkalak and Abul mountain, with an antique cyclopean castle, medieval wall ruins, cave-tombs and, of course, ancient churches (Surb Harutyun of 10-11th centuries, Surb Astvatsatsin of the 19th century).[1]

Church Foundation: Before the foundation of Surb Astvatsatsin (The Holy Mother of God) Church, a parish church of the 10th -11th centuries by the name of Surb Harutyun (St. Resurrection) operated in the village.[2] As of 1841, Surb Harutyun Church was stony.[3] The mentioned church operated until the 70s - 80s of the 19th century, but later it became necessary to build a new, larger church, which was initiated by the villagers.

The construction of Surb Astvatsatsin Church in Abul village began in 1884.[4] The newly established church operated normally. Thus, mentions about the church can be found in the records of the churches of the Diocese. As of 1915-1916, the number of church parishioners reached 1263.[5]

Architecture: Surb Astvatsatsin Church is built of polished tufa. The external dimensions are 20.2x10.4m. It has a triple nave structure, chapels and two pairs of columns. The bell tower was on top of the western facade which was destroyed by lightning strikes.[6]

veneered with metal, and the bell tower is built on its western part. The interior space of the church is divided into three naves with arched pillars. The walls are plastered and painted. The altar is in the eastern part, with the chapels on its right and left sides. The font is located on the northern wall.[7]

Parish priests: Among the priests of Surb Astvatsatsin Church of Abul were Father Hakob Mikaelian, who priested in 1839-1840[8] and priest Zakaria priesting in the 1870s.[9]

Tombs and Kharaba village site: In the western side of the village some pre-Christian tombs are preserved. In the environs of the church two village sites by the name of Kharaba 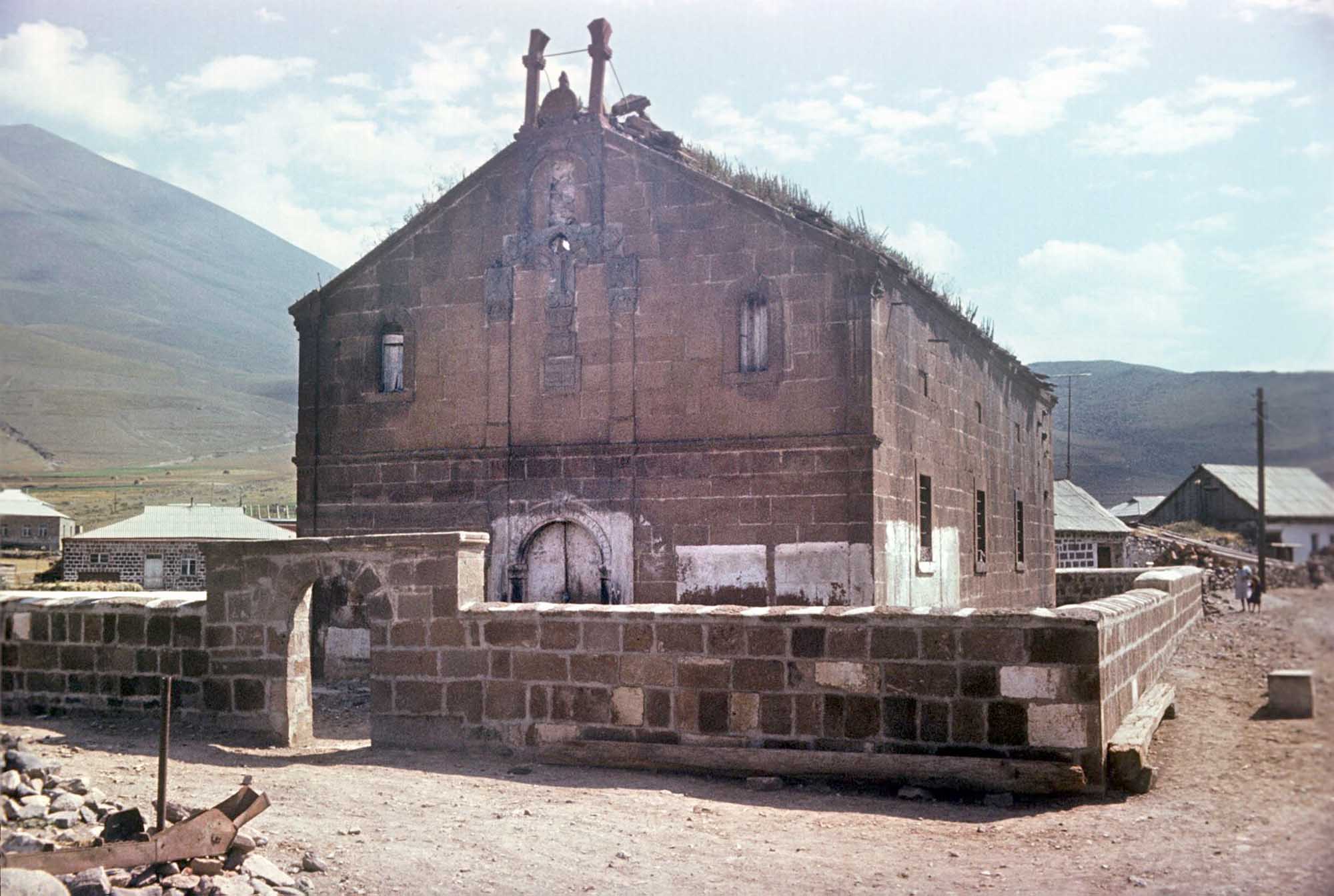 are also preserved, in one of which they found polished stones and a cemetery of the completely destroyed church.[12]

Church re-consecration: On July 3, 2010, by hands of the Primate of the Diocese of the Armenian Apostolic Church in Georgia, His Grace Bishop Vazgen Mirzakhanyan and with participation of the General Vicar of Samtskhe-Javakhk and Tsalka Diocese Father Babken Salbian, Surb Astvatsatsin Church of Abul village of Akhalkalak region was re-consecrated .The next day, the spiritual pastor of Akhalkalak Father Tatev Priest Marukyan delivered a Divine Liturgy in the newly re-consecrated church and performed community baptism. Philanthropist Stepan Khanjyan donated beautiful crosses to all the baptized ones.[13]

Surb Astvatsatsin Church was renovated and the area was reformed with the philanthropy of Stepan Khanjyan from Abul by origin.

[7] The Armenian Historical and Cultural Heritage Study Center in Georgia. Diocese of the Armenian Apostolic Church in Georgia