Construction of the church: The church of St. Etchmiatsin in Tbilisi is a marvelous architectural structure built still in 1805 by the hands of the masters from Vakharshapat and Tbilisi residents’ expenses.The entire history of the Church testifies to the fact that it has always been in the center of attention and care of the faithful Armenians and the frequent reconstructions in 1845, 1854,1884, 1898, 1900, 1912, 1944 are the evidence of that.

Archives and sources ,as well as inscriptions on the walls of the church have been preserved on the construction and further renovation of St. Gevorg Church of Etchmiatsin (currently St. Etchmiatsin), located in the central, prestigious and Armenian-populated district of Tbilisi,Avlabari.Particularly, information on the construction of the church is available from the report written by Priest Ter-Hovnan Martirosov in 1815 and presented to Nerses Ashtaraketsi,and the description of churches of Tiflis made by Egnate Ioseliani in 1837.The probable date of the foundation is 1805/1806, written by prof. L. Melikset-Bek in the work "Georgian Sources on Armenia and Armenians".[1]

Architecture: The Church of St. Etchmiatsin is a brick construction, with its dome -shaped cylinders, and the rectangular chapels have a door to the Great Altar, however their second floors are not open to the hall and are actually nooks.The western door (the church has also entrances from the north and the south) opens in a rectangular entrance, which is outside the building's total area.The windows of the longitudinal walls are quite large (1.5 m in width). There are also round windows and hollows, and the eastern façade has a semi-circular pair of niches in the plan.[2]

Renovations in the 19th and early 20th centuries: According to E. Israelian’s description on the churches of Tiflis in 1837 the church was a wooden, rectangular building without a dome and a belfry.[3]The project of fundamental renovation was formed in 1845.According to the testimony of experienced masters invited for the case, the expense of the new church to be built in the old place would cost about 20 thousand rubles.The church was renovated as a domed temple in 1846.The inscription on it is preserved in the construction record inserted above the western entrance of the church.[4]Official archival documents relating to the reconstruction of 1845-1846 have also been preserved .[5]Unfortunately, the available materials do not give an opportunity to determine the date of the end of the church renovation, but it is clear that the construction took place in the late 1850's.

In 1898, the church needed a new renovation. "... our church is ruinous and it is necessary to completely repair the roof which threatens the collapse of the western wall of the 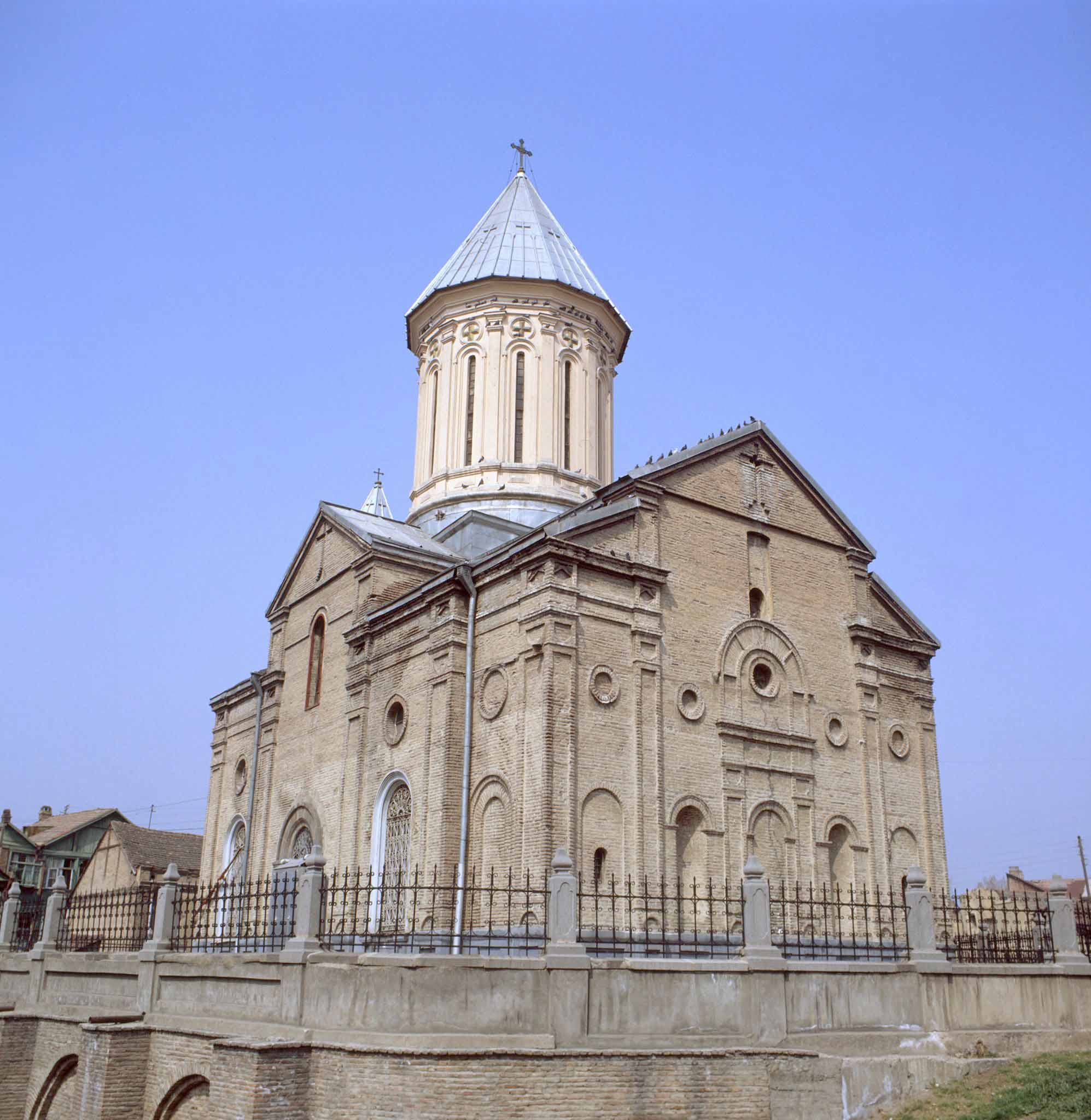 church ..." .[6]In 1900 architect P. N. Grigoryants makes up the estimate of the church renovation (about 3500 rubles).To the parishoners’ request, the consortium allows them to undertake the renovation by their own means .[7] The renovations took place in 1912.

Rebuilding of the 20th century: In 1944-1945 the church underwent the necessary renovation. Some partial renovations were also made in 1983.St. Gevorg Church of Etchmiatsin is one of the few Armenian churches in Georgia which continued its activity also in Soviet period.Its extremely miserable state was dangerous and threatened by an unexpected collapse. The condition worsened in 2001 after the earthquake in Tbilisi.

From 2002 under the leadership of the Diocese of the Armenian Apostolic Church in Georgia, on the initiative of His Grace Bishop Vazgen Mirzakhanyan, Church renovation projects were developed in 2004.In 2006, a new project was developed with the joint efforts of the Mother See of Holy Etchmiadzin, the “Armenia” Pan-Armenian Fund and the Armenians of Argentina.The nearly collapsing church was renovated in 2006-2010 with the support of the pious Armenians of the US Western Diocese and the Mother See of Holy Etchmiadzin.During his Pontifical Visit to Georgia in 2011, His Holiness Garekin II, Supreme Patriarch and Catholicos of All Armenians, solemnly performed the sanctification ceremony of the renovated church .

On June 12 2011, by the initiative of the Primate of the Diocese of the Armenian Apostolic Church in Georgia, His Grace Bishop Vazgen Mirzakhanyan, the "Hayartun" Educational - Cultural and Youth Center was opened near St. Etchmiatsin Church in Tbilisi,with the financial support of the philanthropists and the Diocese of the Armenian Apostolic Church in Georgia modelling the namesake organization headed by H.Tumanyan in 1921-1930. In the "Hayartun" Center, adjunct to St. Etchmiatsin Church in Tbilisi, nowadays there are functioning the Sunday School after prophet St.Eliah,(1997),the Saturday School after St. Grigor Narekatsi (2010), "St. Movses Khorenatsi" Preschool (2011), a number of creative groups and benevolent programs. Due to the noble and productive work of the above-mentioned structures, preservation of the Armenian language, restoration of national-religious holidays and traditions, strengthening and development of the Armenian-Georgian cultural ties become possible.