The precise date of the construction of Surb Khach Church in the village of Sazel is unknown. The first testimonies concerning the church relate to 1839. The existence of a church in Sazel by the same name is also testified in one of the documents of 1846[1].It has been wooden since the 1860's[2], and since 1885 it is mentioned as a stony building[3].

Church renovation: In the second half of the 19th and the first decade of the 20th century Surb Khach Church underwent reconstruction and numerous renovations. The record on the renovation of the church dates to 1872.[4]The statement to the Spiritual Government of Akhaltsikhe in 1909 states: "... The roof of Surb Khach Church is earthen, the logs have rotten and broken, so in order to prevent the danger in future we have decided to roof with sheet-lead and lift the walls slightly." The renovation costs of 1909 were about 2238 rubles 80 kopecks. [5] TThe reconstructed church was consecrated in 1910.

Architecture: The church is a stony building with the only entrance from the southern front, with missing columns and double chapels. The outer dimensions are 13,10 x 8,48 m.[6] It is built of mixed construction materials. Slabs, polished and unpolished tuff were used in construction. Above the entrance there is a carved khachkar (cross stone) of tuff. The belfry 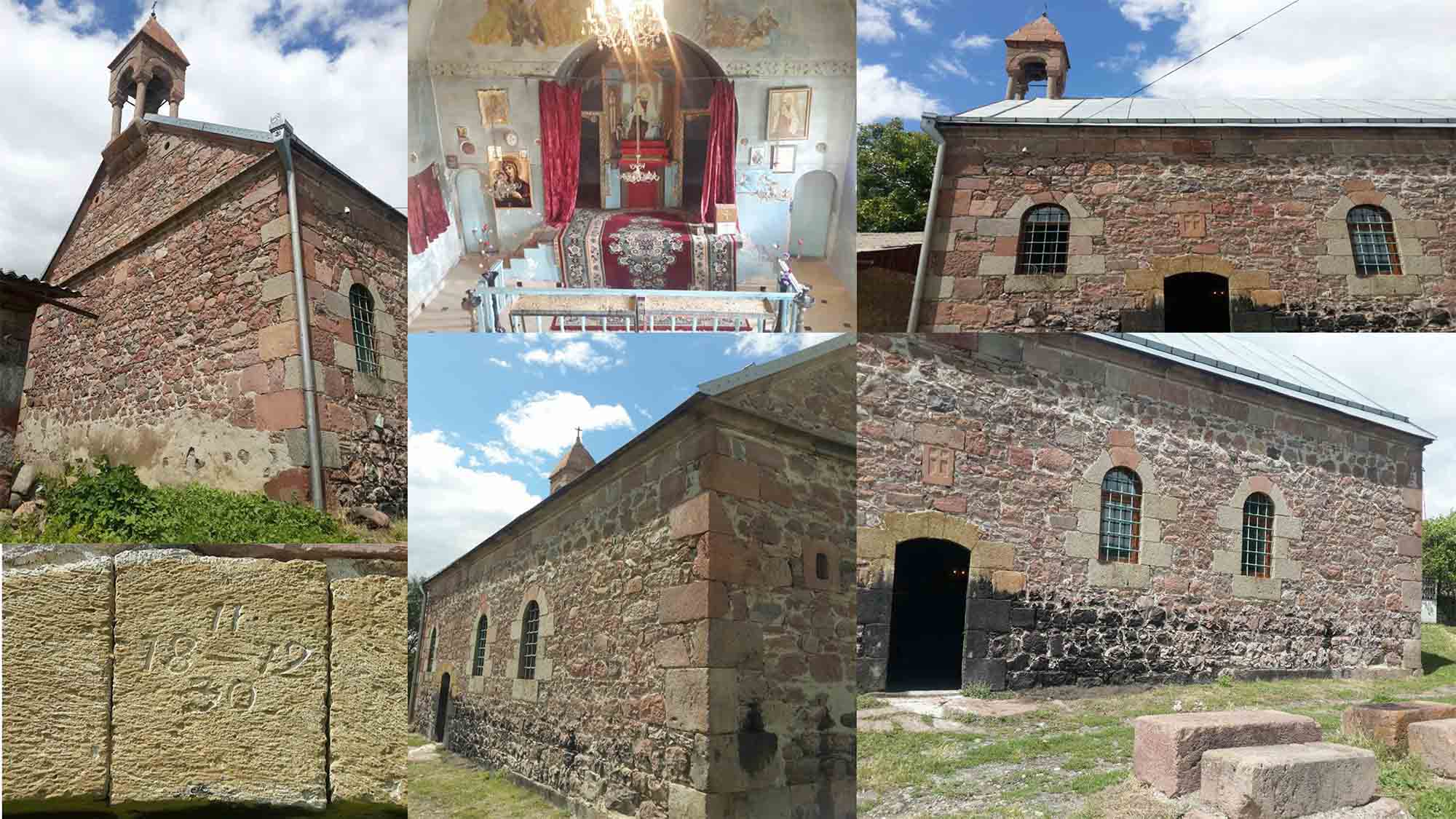 is built on the roof of the western part. The roof is double-slopping ,covered with sheet-lead. The interior walls are decorated with murals. The floor is covered with modern tiles. In the western part there is a middle-storey based on four wooden supporting columns. In the eastern part, the altar is built four steps high. The font is placed in the niche of the northern wall.[7]

Church items and manuscripts: In 1826-1841, scribe Martiros Ter-Nahapetyants compiled a Collected work. Five prayer books have been preserved in the church up to now.[11]

School: In 1881, the diocesan authorities compiled and approved the charter of the opening school in Sazel.[12] The school did not function regularly. In 1908 it was mentioned among the schools receiving benefits from the Caucasian Charity Foundation.[13] In the following years, due to the benefit allocated by the Caucasian Charity Foundation and the Baku Cultural Union some parish schools were opened again in the villages of Sazel and Small Pamach, but were closed in 1916 because of the limited means.[14]

Church in the Soviet and post-Soviet period: Surb Khach Church was closed in 1936. Like in case of many other churches, the property of the church in the village of Sazel was confiscated, and the church turned into a warehouse. In the post-Soviet era, the local chapels were gradually being repaired and re-opened by the people. The church renovation works started in 1994. The consecration took place in April 1996, led by the Primate of the Diocese of the Armenian Apostolic Church in Georgia, Gevorg archbishop Seraydaryan, with the participation of spiritual overseer of Akhaltsikhe region ,Gurgen friar Aghababyan, deacon of the Mother See of Holy Etchmiatsin, Harutyun Pilavchyan .[15]

Presently, the church continues to function and unite the local population, organizing its spiritual and educational-cultural life.

[8] The gravestone of M. Ter-Nahapetyan is located on the southern side of the cemetery