The village of Great Pamach is located 7.5 km south-west from Akhaltsikhe. It is an Armenian-populated village with its church and sacred places. A record concerning the church of Great Pamach village is preserved in the archival documents of 1837 in the Consortium of the Imeretian Diocese and the Armenian Apostolic Church in Georgia. Particularly, Surb Khach Church of Great Pamach is also included in the list of movable and immovable properties of the church of 1837, whose name, however, is not mentioned.[1] As of 1863, the village church was still wooden.[2] A testimony relating to the fact that it was stony dates since 1885.[3]

Church renaming and renovations: Surb Khach church of Great Pamach village has repeatedly undergone renovations and re-consecrations. Accordingly, the frequent renaming of the church is not accidental. In the archival documents of 1840 the church is mentioned by the name of St. Prkich,[4] while in the archives of 1841 and 1846 it is named after St. Stepanos.[5] According to the monument expert S. Karapetyan , the renaming of the church took place between 1843 and 1863. Perhaps, the name of Surb Khach was given after then, although in the mentioned documents of 1863 it was just mentioned as a wooden church.[6]

At the end of the 19th and the early 20th centuries works have been carried out to renovate the church. According to the inscription on the western entrance door, the construction of the church was completed in 1908.[7]

In the National Archives of Armenia some archival documents are preserved about the renovation and economic expenses of the church of 1903-1911,[8] which also affirms the

activities and spiritual services of the church.

Architecture: The church is built of polished stone, the columns are missing inside, and the three-storey belfry is built adjacent to the only entrance from the western front. The church is a spacious and large structure.[9]

Church items and Gospels: So far, the church has some oil painting icons with brief inscriptions and the Printed Dinner Book published in Constantinople in 1723. Among the residents Arshak Gimishyan keeps a leather-bound parchment manuscript in his house.[12]

School: The exact date of the opening of the school has not been established. It has been functioning since the early 1880's, but the economic hardships have caused frequent 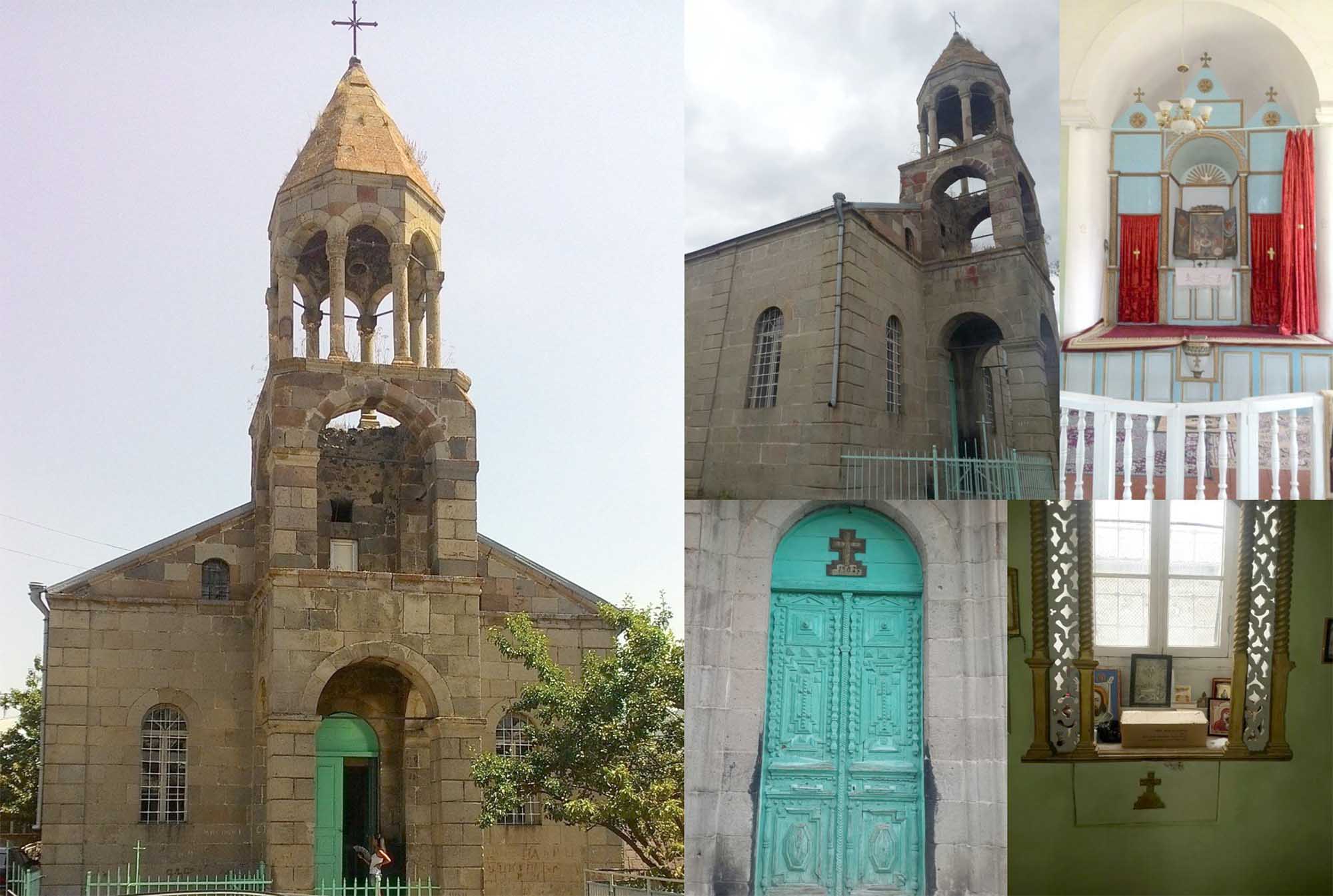 impediments. In 1891 the eye-witness said about the school: "They used to have a college, but during my visit they didn’t have." In 1909, with the financial assistance of the Armenian Cultural Union of Baku, a school was opened again in Great Pamach, and the new building of the school was built in 1917. This is testified by the order of the Catholicos addressed to the Synod in 1917 for providing a one-off 300 rubles to the School Construction Commission from the percentage of the school founding money.[13]

Church re-consecration: With the blessing of His Holiness Garegin I, Supreme Patriarch and Catholicos of all Armenians, after 70 years of break Surb Khach Church was re-opened and consecrated on April 23, 1996. The people of Great Pamach village were present at the church re-dedication ceremony for the first time. The dedication ceremony was attended by the Primate of the Diocese of the Armenian Apostolic Church in Georgia, His Holiness Gevorg archbishop Seradaryan. Spiritual overseer of Akhaltsikhe region ,His Holiness Gurgen friar Aghababyan and the friar of the Mother See of Holy Echmiadzin, Harutyun deacon Pilavchyan were also present at the ceremony. At the end of the ceremony, the Holy Father thanked on behalf of His Holiness. In their turn, the intellectuals and state officials also expressed gratitude.[14]