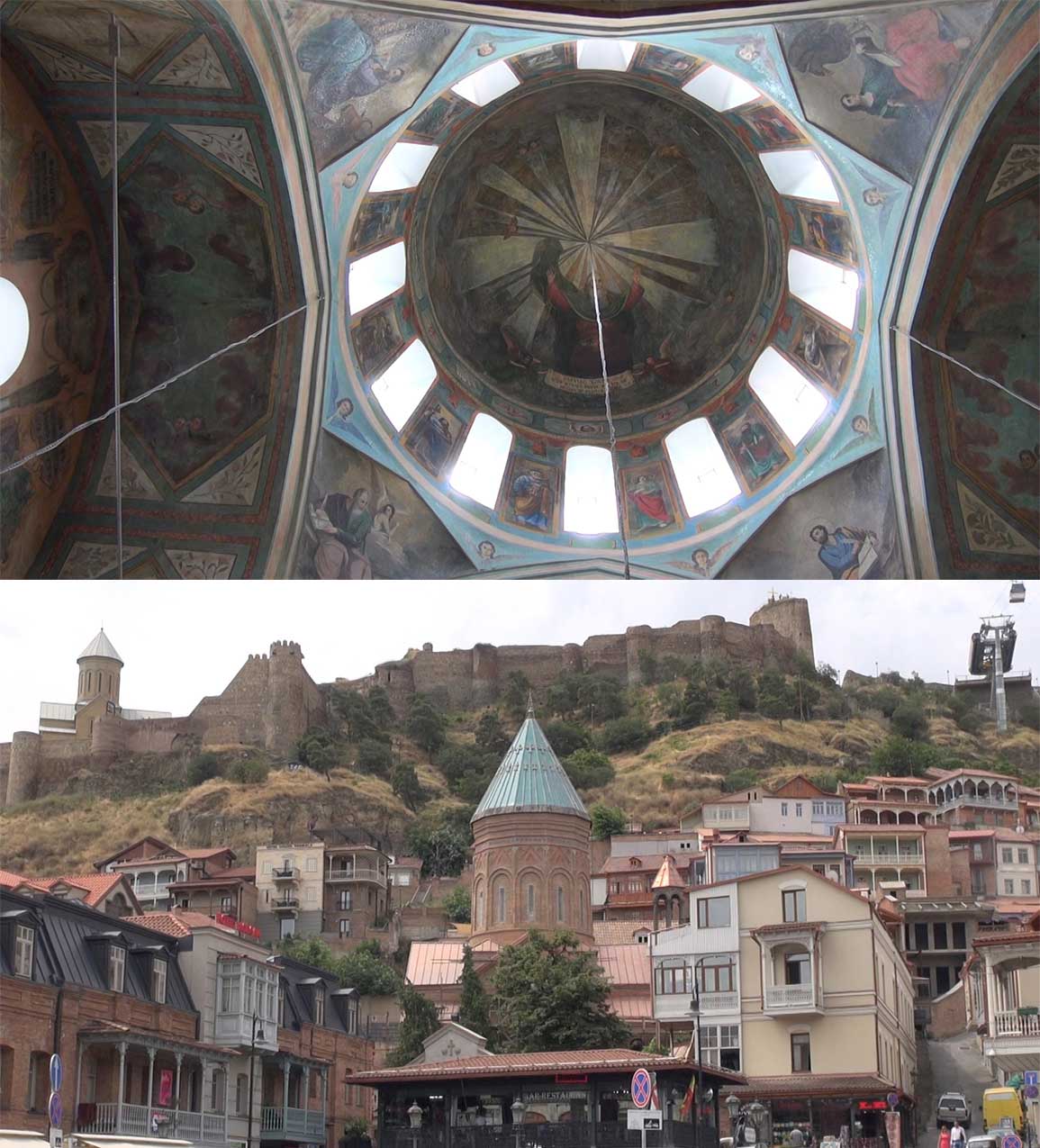 Tbilisi Mediani St. Gevorg Church is one of the oldest Armenian churches which has been the main church of the Armenian community of the city for a long time[1] and now is the leader of the Diocese of the Armenian Apostolic Church in Georgia. In the medieval sources it is called Katokhike St. Astvatsatsin and Gevorg Zoravar. Later, taking into consideration it’s topographical position located on a well-known square, the church was called Meidani St. Gevorg or Great Church of Berd.[2]

The date of the church foundation is mentioned 631.[3] However there exists also the hypothesis of being founded in 1251.[4] The hypothesis of being built in the 13th century was taken into consideration by the researchers on the basis of previously existing, but now preserved construction records on the walls of the church, and Hovhannes Yerznkatsi’s reported data. According to them, it was built by Prince Umek[5] in 1251.

It is clear, that our scientists have grounds for relying on the reputable Yerznkatsi’s words,as Yerznkatsi himself was a contemporary of Prince Umek’s heirs who could give correct information about the "building" of the church.

In fact, the date of the church foundation ranges from 7 to 13th centuries.

Architecture. The church belongs to the domed hall type, which was widely spread in Armenia from the 7th century (Zovuni, Ptghni, Aruch) where the dome rises above the four central strut walls.

Meidani St. Gevorg Church is entirely a brick construction , but the basis and the first row of the walls are built of massive polished stones. Inside the church, on both sides of the Great Altar, there are pair of double chapels where the entrances of the top floors are opened through the altar. The building has two entrances from the western and northern sides.[6]

Frescoes. St. Gevorg Church is unique with its frescos, whose most of the oldest ones belong to the 14th-15th centuries.

The walls of the temple are illustrated with the Old Testament stories belonging to the family of Hovnatanyan painters.

Later period frescoes are painted by the famous Armenian painter Gevorg Bashinjaghyan at the beginning of the 20th century. A special attention was paid to the reconstruction of

Writing: Armenian medieval monasteries and a number of well-known churches had their functioning script houses adjacent to them. Tbilisi St. Gevorg Church was one of them about which many testimonies have been preserved in manuscripts. The first known handwritten manuscript from St. Gevorg Church script house is a Gospel of the 14th century (Venice, Mekhitarians’ Matenadaran, hand. 109).[8]

Funerals beside the church: St. Gevorg Church is also remarkable, because at different times a number of prominent Armenian public and political figures have been buried beside it. However, traces of the medieval burials have not been preserved.

In the modern period, the most prominent of the buried people is Sayat-Nova (1722-1795), the court singer of King Heraclius, the troubadour-poet, well-known not only in the Armenian but also in the Georgian society, composing in three languages: armenian, georgian and persian. Next to Sayat-Nova's tomb, the remains of the outstanding painter Gevorg Bashinjaghyan are buried.[9] From the graveyard of the former armenian monastery of Mother Cathedral of Tbilisi (was destroyed in the late 1930s), the remains of the outstanding soldiers of Russian Army earl Mikayel Loris-Melikov (1824-1888), Hovhannes (Ivan) Lazarev 1820-1879), Arshak Ter-Ghukasov (1819-1881) and Behbut Shelkovnikov (1837-1878) were moved and reburied. Here were also held funerals of figures of noble origin or other spiritual and cultural merits.

Archbishop Gevorg Seraydaryan, leader of the Diocese of the Armenian Apostolic Church in Georgia from 1972 to 2002, has been buried in the church graveyard recently.

Restoration: Tbilisi St. Gevorg is not only the leading church of the Armenian Apostolic Church in Georgia, but also the witness of the centuries-old presence of the Armenian people in this city, has reached the 21st century through hardships. Throughout the years, the building has been damaged significantly on four northern and southern walls, with cracked walls , a broken roof, and so on.

In 2012-2015, by the initiative of the Primate of the Georgian Diocese Bishop Vazgen Mirzakhanyan, and well-known businessman and philanthropist Ruben Vardanyan, a fund for

the restoration of the Church of St. Gevorg was set up with a group of philanthropists’ implication.[10]

By means of the Fund, the renovation of the church, and the restoration of its frescos were performed.

First, the frescoes of the church were studied by the Armenian Fresco Reconstructive Research Center (Head: Arzhanik Hovhannisyan) and Italian Restorative Professor Fabricio Yakobini. The main construction work was carried out by a Georgian specialized organization (CJSC Mgvime). In parallel with the construction works, a large-scale reconstruction of frescoes has been made, during which numerous new images have been discovered. The iconography (Iconostas) was also renovated. One of the peculiarities of this fresco is that it has been re-painted several times since the 17th century and is sometimes covered with new layers of plaster. After the cleaning of the frescoes, a number of previously unknown images like Father God, the Twelve Apostles, the Iconography of Tortures and the Four Evangelists illustrated on the dome were found.[11]

Thus, a more comprehensive and clear understanding of the general system of the Church became possible.

Rededication Ceremony: In 2013-2015 the church was renovated at the initiative of the Primate of the Armenian Diocese of the Armenian Apostolic Church in Georgia, Bishop Vazgen Mirzakhanyan with the support of well-known businessman, philanthropist Ruben Vardanyan, the former Prime Minister of Georgia Bidzina Ivanishvili and others.

On October 31, 2015, in the presence of His Holiness Karekin II, Supreme Patriarch and Catholicos of All Armenians ,and the RA President Serzh Sargsyan the rededication ceremony of Tbilisi St.Gevorg Church was held.

A. Eritsian, Armenians of Tiflis and their statistics;

[5] According to Kirakos Gandzaketsi, Umek the Prince ("Great Merchant Umek") migrated from Karin to Tiflis in 1242 and reached an influential position in the Georgian court.

[9] See the same place (Gevorg Bashinjaghyan worked as a painter at St. Gevorg Church in 1922-1923). The great artist painted four large paintings on the inside walls of the church, on the top sides of the altar and on the opposite walls.

(1) "Jesus in the Garden of Gethsemane"