THE CHURCH WAS FOUNDED IN THE FIRST HALF OF THE 19TH CENTURY.

The establishment of the church: Ghoushchi is an Armenian-populated village in Tsalka region, located 22 km south-west from the regional center. Both archival documents and the press of that time provide information about the two churches in the village. A church named Surb Nshan is mentioned in the archival documents of the Armenian Apostolic Church in Georgia and Imeretian Diocese in the 30s and 40s of the 19th century. Particularly, according to the Diocesan churches' bulletin in 1840, the number of parishioners of Surb Nshan church was 133 [1]. Rev. Father Mikayel Ter-Avetisyan is mentioned as a priest [2]. It is mentioned in the bulletin in 1845 that the village has one wooden parish church [3]. In fact, it is about Surb Nshan church again.

It is mentioned in the bulletin from 1866 that there is one church built of stone [4]. In this case it is about Surb Gevorg church because there already was information about a church named Surb Gevorg in the archival documents from 1860-1880. According to A. Davtyan, Surb Gevorg church was founded in 1855 with public funds [5]. However, in accordance with ''Travel Memoir'' (‘’Chanaparhordakan Hishatakaran'’) published in 1885, in ''Ardzaganq'' newspaper, the magnificent stone church of Ghoushchi, the belfry and the gates were built by means of Mhates's Hovakim and Ohan Mehrabyans, residents of the same village. It is supposed that this information refers to the above-mentioned Surb Gevorg church. The year of the foundation, however, is not mentioned. 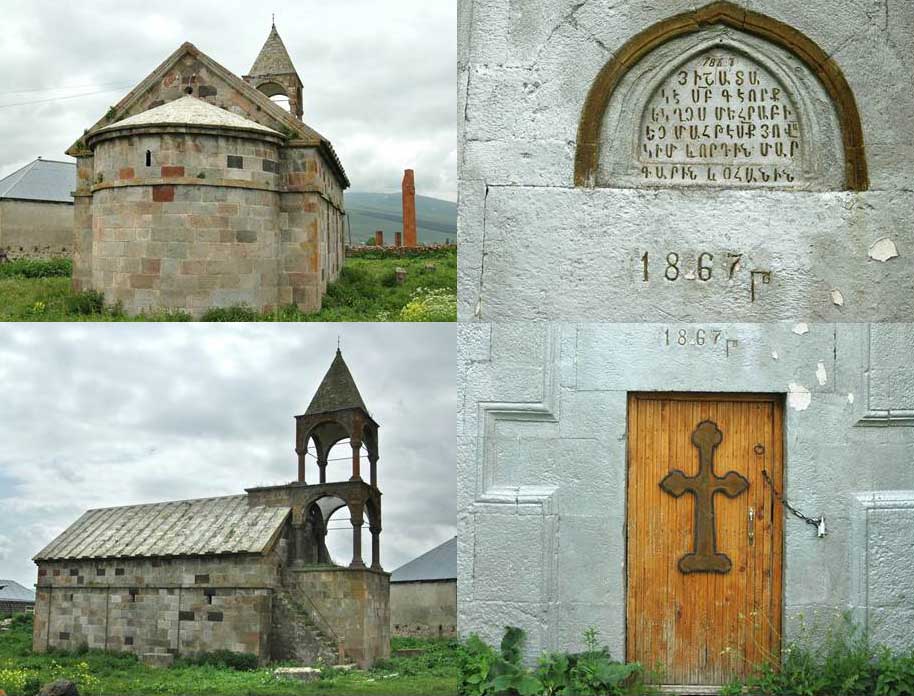 Despite that church, the author mentioned that there is another small church in the village, near which is located a stone granary of Tsalka [6]. It can be assumed that the mentioned small church is the same Surb Nshan church mentioned in the archival documents of 1830-40.

Architecture: Surb Gevorg church is built of gray tuff (type of stone), it has a type of basilica and one common hall. The overall dimensions are 16,32 x 5,85 m. Half-deep windows are cut on the north and south walls. The entrance is on the right side of the three-story belfry built on the western side. There are two inscriptions above the right side of the belfry. The belfry has a separate entrance with upstairs which leans on the left wall of the belfry. Holy Altar is located in the northern part of the church. The Armenian inscription above the entrance to the church says: ''Surb Gevorg church. This recalls the priest of Mehrab, Mehtes's Havakim and his sons Margar and Ohan. Writing: 1867 (1867) ''.

Parish Priests: Rev. Father Hovhannes Ter-Hakobyan is mentioned as the priest of Surb Gevorg church in Ghoushchi village [8]. He was a priest in 1860-1800-ies.

School: In accordance with the archival documents of the Georgian and Imeretian Diocese, the one-class school in Ghoushchi village was opened in 1908. Khachatur Nalbandyants, Gevorg Avetisyants, Igantios Mehrabyants and Gevorg Simonyants were members of the school's Board of Trustees [9].

Reconstruction and re-consecration of the church: Surb Gevorg church in Ghoushchi village was renovated in 2003 with support of benefactor Stepan Baroyan who was born in Ghoushchi. On April 7, 2004, Surb Gevorg church was re-consecrated by the Primate of the Armenian Diocese in Georgia, His Grace Bishop Vazgen Mirzakhanyan with the participation of Prelate of Samtskhe-Javakheti and Tsalka's General Prelacy Rev. Father Archimandrite Babgen Salbiyan and local clergy [10].