The establishment of the church: The basic information about Surb Sarkis church in the village of Nardevan is maintained in the archival documents of the Consistory Fund of the Georgian and Imeretian Dioceses of the Armenian Apostolic Holy Church. Particularly, the earliest mention dates back to 1839-1840. Similar information about the establishment of Surb Sarkis church in Nardevan village is also reported in the relevant funds of the National Archives of Georgia [1]. In accordance with the bulletin of the Diocesan churches, in 1840 Surb Sarkis church had 334 parishioners [2]. Rev. Father Manuk Sargsyan was mentioned as a priest [3]. In the 1860s, the church was mentioned as a construction built of stone [4]. Accordingly to the data of ''Travel Memoir'' (''Chanaparhordakan Hishatakaran'') published in ''Ardzaganq'' newspaper in 1885, the silver vessels and gospels kept in the Armenian churches of the region were brought by Armenian immigrants from the settlements they were living in previously. Surb Sarkis church in Nardevan village had a handwritten Gospel, written in the city of Yerznka in 1592 (during the Catholciosate of David and Rotakes, Archbishop of Yerznka) [5]. The church had a Book of Hours, a book for liturgy celebration, and a small Calendar of Simeon's church feasts [6].

Architecture: The church was built of burnt stone and surrounded by stone gates [7]. The temple is built of red tuff (a type of stone) and represents the basilica type. The eastern part of the church is like a semi-basement. The overall dimensions are 12,01x9,54 m. The entrance is from the western side, the upper part of which is decorated. Two inscriptions in Armenian are immediately above the entrance [8]: 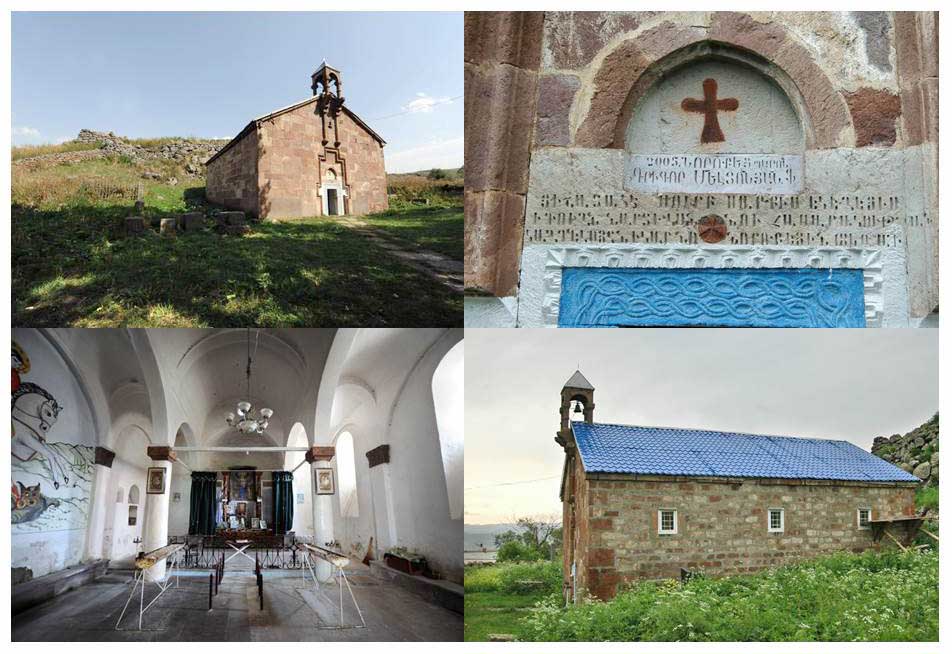 School: The one-room church-parish school of Nardevan village was placed in the narthex of the church [12]. Later it was closed. As of 1906, the village had no school [13].

Renovation of the church: during the Soviet regime, Surb Sarkis church in Nardevan village was also closed and turned into a warehouse. The villagers testify that the church bell was removed and handed over to the village school as property, but later it was returned to the church due to the efforts of the villagers [14]. During the Post-Soviet era, the church was partially renovated by the villagers. Nowadays the church functions and serves the spiritual needs of the faithful people.