The church was established in the 10-11th centuries.

The church was renovated in the 19th century.

Surb Gevorg (Saint George) or Surb Nshan (Saint Nshan) church in the village of Samgheret was built on the site of a medieval Armenian church, partially with its own stones. In archival documents of Georgia and Imeretian Dioceses of the Armenian Apostolic Church the first mention of a parish church in Samgheret village was only since 1857 It is mentioned as a wooden structure [1]. There is a mention of two functioning churches in the village and two priests in Diocesan churches' bulletin of 1860s [2].

''…It has a magnificent chapel named after Saint George. A writing on the wall of the church: ''I built this church for the brotherhood of the church and they gave me two hours in the year of 1061’’, mentioned in one of the first descriptions of the church [3]. Other sources also emphasize the fact that the church is an ancient building. In 1884, in accordance with the ‘’Travel Memoir’’ published in ‘’Ardzaganq’’ newspaper, the village had a small ancient church built of stone. The number of Armenians is mentioned 20 houses [4]. 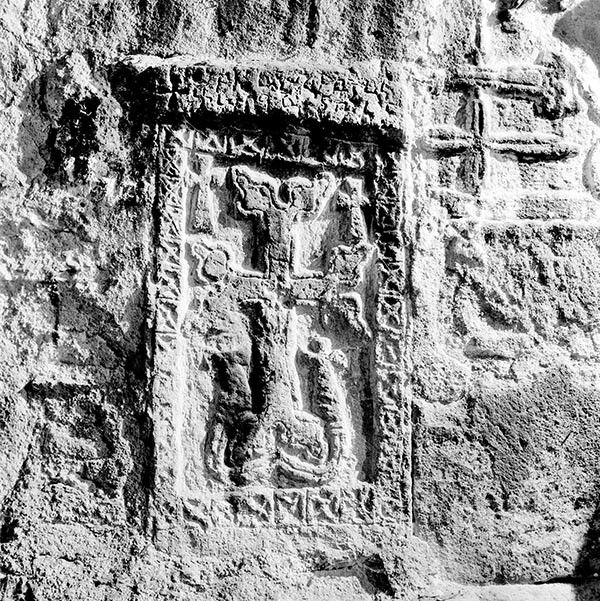 Alexander Araratyants, the correspondent of ‘’Meghu Hayastani’’ (“The Bee of Armenia”) newspaper provided information about the Armenian inscription on the lintel of the entrance door of Surb Gevorg church [6].

During the Soviet period, the roof of the church was repaired. Nowadays it is well known not as Surb Gevorg, as it was evidenced in many documents, but as Surb Nshan.

Architecture: The church was built of mixed type stones. It has a hall-type. The external dimensions are 10,94×5,76 m. The entrance is opened from the southern side. It is assumed that it had one more entrance from the western side. The interior walls are partially restored. The church is surrounded by the medieval Armenian cemetery were tombstones with Armenian inscriptions are.

Priests: Rev. Father Sargis Ter-Grigoryan was one of the priests of Surb Gevorg church [8].

The church in the Soviet and Post-Soviet period: During the Soviet era, Surb Astvatsatsin church, like many other churches, was closed and turned into a warehouse. Later, the villagers initiated cleaning and improving the church. Due to the locals' care and efforts, the church remains standing. Later, in 2016, Surb Astvatsatsin church was vandalized and was in a semi-ruined condition. Now the restoration of the church is being implemented by the efforts of the villagers.