Merenya is an Armenian-populated village 15km away from Akhalkalaki. Surb Astvatsatsin Church in the village was founded in the 30s of the 19th century.[1] It is mentioned in the Bulletin of churches and clergy of the Armenian Apostolic Church in Georgia and the Imeretian Diocese of 1839-1840. Hakob Sargsyan, Khachatur Hovhannisyan, Galust Makaryan were the psalm-readers.[2] As of 1866, the church was still wooden,[3] and in 1885 it was stony with wooden cover.[4] Along with a number of churches in villages of Akhalkalaki, Surb Astvatsatsin Church was also destroyed by the earthquake on December 19, 1899. However, it was rebuilt in a few years. [5]

Architecture: Surb Astvatsatsin Church in Merenya is built of tuff and belongs to the single-nave hall type. The total dimensions are 16x11m. The entrance is from the western side, above which there is an inscription in Armenian. The bell tower is built above the entrance. The church is roofed with tinplate. The walls are plastered and painted in white. The Altar is located on the eastern part of the building with its right and left –side chapels. The baptismal font is on the northern wall.[6]

Parish priests: Among the priests of Surb Astvatsatsin Church were Father Hovakim Baghdasaryan,[7] Father Isaac Aslanyants[8], who priested in the 1850-1880s.

School: The church-parish school was built of stone and lime, where they taught private teaching.[9] According to the school bulletin of the Armenian Apostolic Church in Georgia and the Imeretian Diocese of 1869, the church-parish school was founded in 1863 by means of the society. In 1869 the school had 43 students and one teacher .[10] Harutyun Aslaniants is mentioned as a teacher.

Church re-consecration: In 2010 on the initiative of the villagers, the two-storey wooden barns inside Surb Astvatsatsin Church were 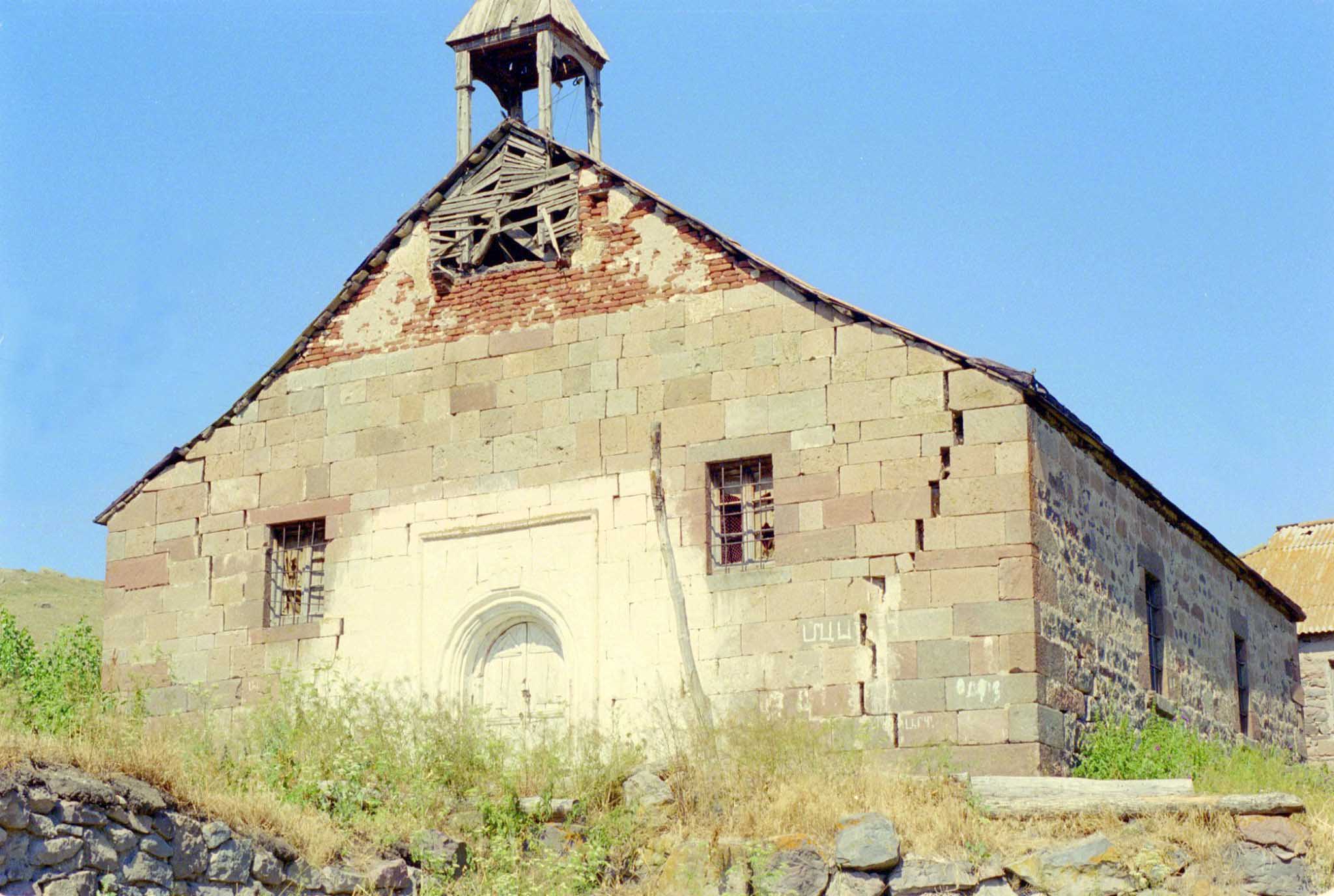 destroyed. The renovation works of the church, which had become a warehouse in the Soviet era, started afterwards. On April 7, 2013, the Primate of the Diocese of the Armenian Apostolic Orthodox Church in Georgia, His Grace Bishop Vazgen Mirzakhanyan, accompanied by the Prelate of Samtskhe-Javakheti and Tsalka’s General Prelacy, Rev. Father Babken Salbiyan and the local clergy re-consecrated Surb Astvatsatsin Church of Merenya. On the evening of April 6, the Opening of the Doors Service (Drnbatsek) was held. Under the leadership of the Primate of the Diocese of the Armenian Apostolic Church, the 16 columns, the baptismal font and the icons of the church were anointed with Holy Chrism. Surb Astvatsatsin Church was renovated and the area was improved by the charity of former villagers of Merenya Masis Amirkhanyan, Ararat Ghushchyan, Ararat Avagyan, Aharon Avagyan, Hamlet Harutyunyan and Zaven Pochikyan.