The church was wooden till 1863.[1] The archival documents on the church give information since 1837.[2]

In the archival documents of the Armenian Apostolic Church in Georgia and Imeretian Diocese the church of the village of Small Pamach is mentioned by the name of St. Hakob (1837), St. Astvatsamayr (St.Mary the Virgin) (1840), and since 1841 by the name of Surb Khach (The Holy Cross).[3] In essence, the church has undergone frequent repairs and re-consecration.

Architecture: The exterior size of the renovated church is 12,85x8,0m. The reconstruction records are located on the southern walls of the adjacent belfry.[4]

Church Gospels: According to the list of movable and immovable properties of churches in the Georgian and Imeretian dioceses of 1837, 5 ritual books have been preserved in Surb Khach church: a Dinner book, a Gospel with a silver cross, the Dzaynaqakh church psalm, a prayer book and Simeon's calendar.[7] To date, the local residents have also preserved two manuscript Gospels of the 15th century.

School: In 1881 a private school was functioning in the village.[8] In the same year, the diocesan authorities decided to open a central 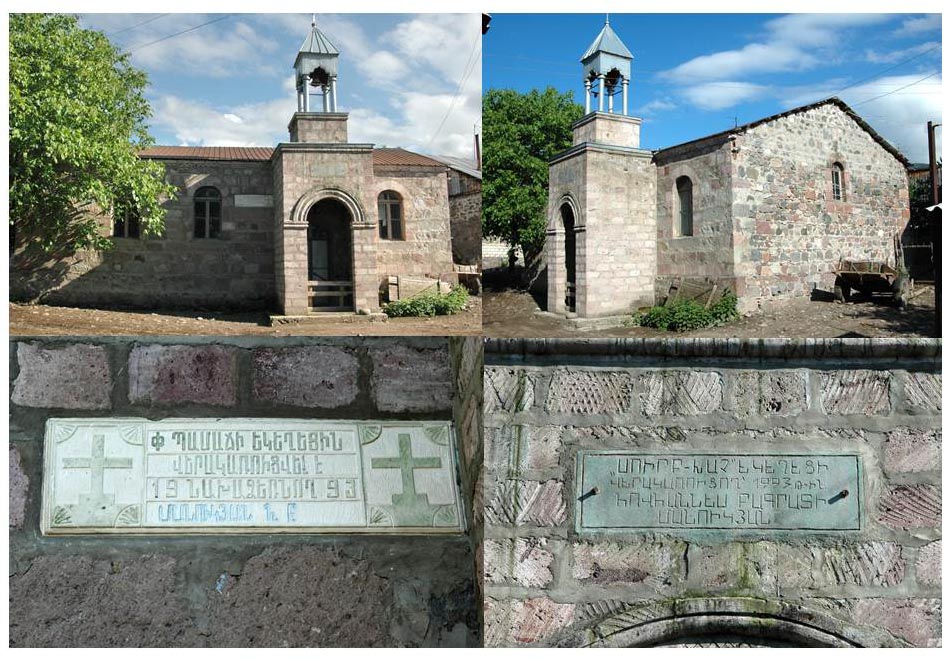 Post-Soviet Period: During the years of its existence the church united around the people, and the spiritual servants cared for the education and spiritual education of the local population, but during the Soviet period the church was closed and turned into a warehouse. Later the church was renovated in the 20th century. The construction started in 1965, but was not completed. With the efforts of the local resident Hovhannes Manukyan, the church renovations continued and were brought to completion in 1993,[11] and the church started to function in 1995.

In 1996 the Primate of the Diocese of the Armenian Apostolic Church in Georgia, His Grace archbishop Gevorg Seraydaryan consecrated the memorial chapel dedicated to the victims of the Genocide built on a high plateau called “Karmir Blur” (Red Hill), in the south of the village.[12]

Church Re-consecration: Over the years, the church again was in need of renovation, and Andranik & Khachatur Baboyans and Ruben Sahakyan from Small Pamach by origin took that mission upon themselves. On December 25, 2011, by hands of the Primate of the Diocese of the Armenian Apostolic Church in Georgia, His Grace Bishop Vazgen Mirzakhanyan and with the participation of the General Vicar of the Samtskhe-Javakheti and Tsalka Priest Babken Salbian, Surb Khach Church ,built at the beginning of the 19th century in the village of Small Pamach, in the Akhaltsikhe region, was re-consecrated.[13] Surb Khach Church of Small Pamach was renovated under the patronage of Ruben Sahakyan, Andranik & Khachatur Baboyans.