Tensioned from the 1830s, whereas in the 1850s on the site of the old church an entirely new church was basically built Address: Akhalkalaki, Street Tavisupleba, 55

Surb Khach Church is located in the center of the town Akhalkalak. The main information about the church construction is given in the archival documents. In the 1830s the Armenian emigrants from Karin built the church by their own means. Later, in the 1850s a new church was built on the site of the old church on the initiative of the resident of Akhalkalak, Karapet Yaghubyants.[1]

Architecture: Surb Khach Church is a domed cathedral with a spacious hall. The external dimensions are 27.7x16 m. Three pairs of columns hold the cover and the dome. The chapels are on both sides of the altar. The only entrance is from the western front. It has a double-storey bell tower. It is built of uncultured stone, mortar and wood. There is an ornament khachkar set on the eastern front of the church which dates back to the 9th-10th centuries. The other khachkar is inside the altar.[4] Another khachkar of 13th -14th centuries, found in one of the Armenian cemeteries in 1989, was taken to the church yard.[5] 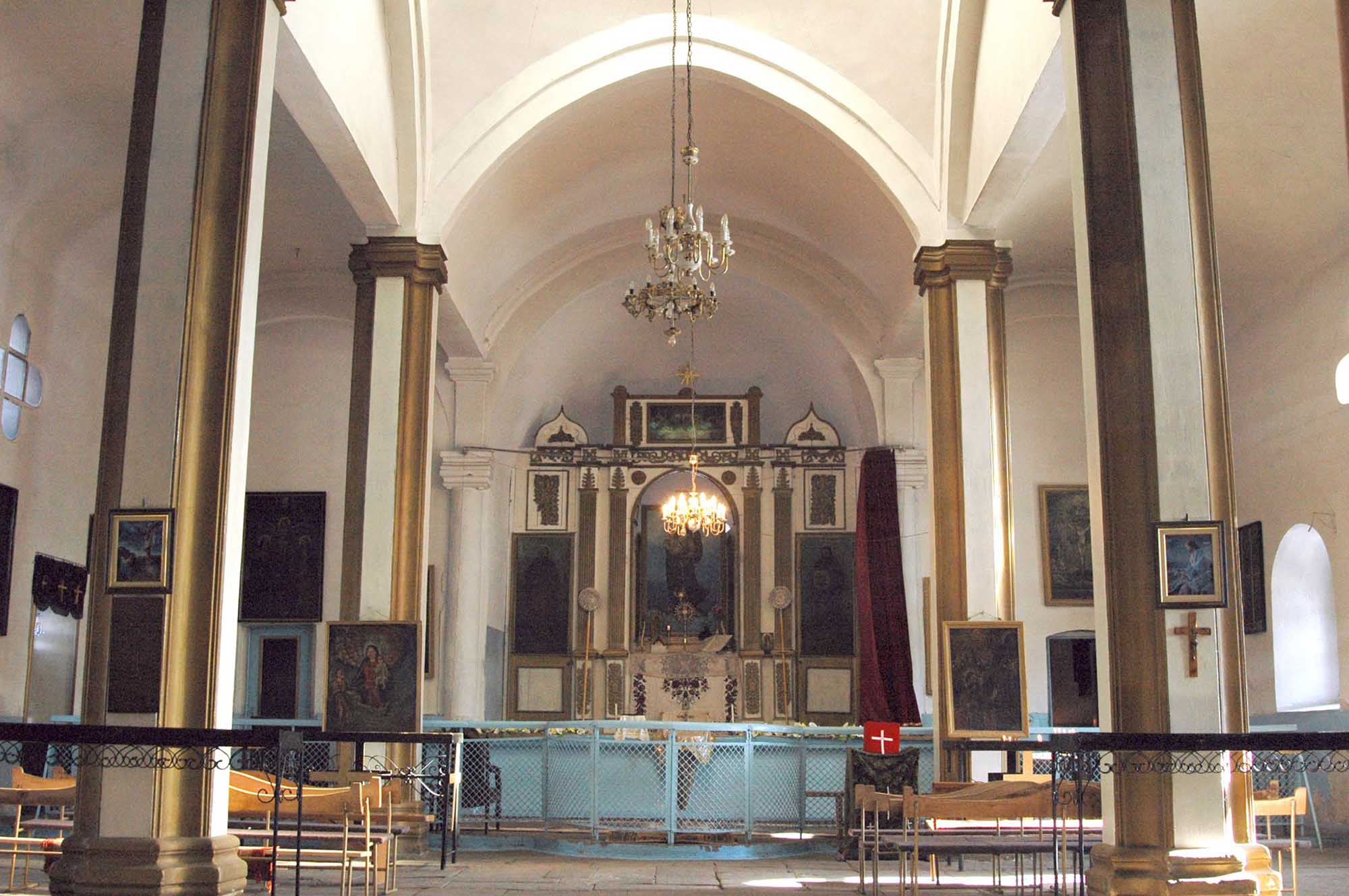 Church property: According to the list of movable and immovable property of churches of the Georgian and Imeretian Diocese of the Armenian Apostolic Church of 1837, Surb Khach Church had ritual books, various church items, as well as real estate. Particularly, the church actually had one kiosk and 8 areas of land in the environs of the church.[9]

School: In 1836 they opened a male parish school with two lessons adjacent to Surb Khach Church by the name of St. Mesrop. The building of the school which stands up to now was built in the first decade of the 20th century. It has been closed and reopened several times during its operation.[10]

On February 12, 1871, in the church vestibule the Sandkhdyan female school was opened with the support of local entrepreneur Hovhannes Hovhanyan.[11]

Reading hall: In 1885 in the north-western part of Surb Khach Church vestibule they built a reading hall by the local residents’ contributions. The church's material condition was slightly improved in the 90s. They built several profitable buildings belonging to the church ,and the money they received was used to meet the needs of the school and the reading hall.[12]

Church in the Soviet and post-Soviet era: In 1921 the church was closed, serving as a salt storeroom. Surb Khach church was reopened only in 1944 at the local faithful people’s request.

During Gevorg Bishop Seraydaryan's leadership, in addition to other churches of the diocese, in 1977 the reconstruction of Surb Khach church was also carried out at the expense of the local government. Particularly, apart from the interior partial renovations, the dilapidated houses in the vicinity of the church were eliminated. Instead, flower gardens were planted. It was also planned to install the central heating of the church.[13]

In 1988 in the church courtyard they erected a monument to the victims of the earthquake and khachkar-monument in memory of the innocent martyrs of the Armenian Genocide of 1915.

In 1998 under the sponsorship of entrepreneur Artavazd Harutyunyan, the cover of the church was partially renovated. On July 22, 2000, in the court of the church the monument of the founder Father Karapet Archbishop Bagratuni was set up.

On August 3, 2008, by hands of the Primate of the Diocese of the Armenian Apostolic Church in Georgia, His Grace Bishop Vazgen Mirzakhanyan and with participation of the general Vicar of the Diocese of Samtskhe-Javakhk and Tsalka Father Babken friar Salbian the Font and the Altar of Surb Khach church were consecrated (by the philanthropy of Kurghinian Brothers and A. Karabekyan).[14]